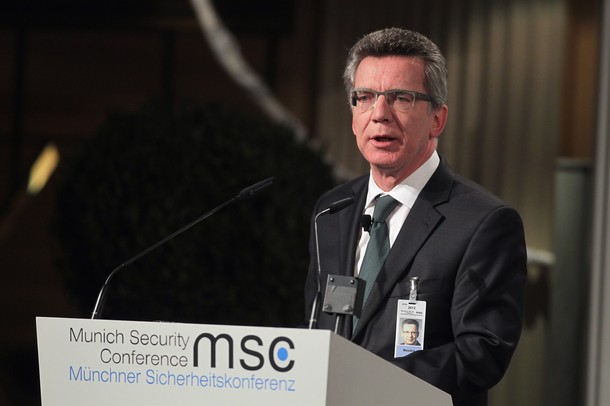 From Bernd Riegert, Deutsche Welle:  During the NATO summit in Brussels, US Defense Secrety Leon Panetta once again briefed his partners on Washington’s military plans.

The US wants to downsize two combat brigades, notably in Germany. Further details are to be announced in April, according to a Pentagon spokesperson. German Defense Minister Thomas de Maizière emphasized in Brussels that the US still views NATO as the most important military alliance: "The withdrawal of some 35,000-40,000 US soldiers from Germany is not dramatic. Europe remains the biggest base for US soldiers abroad. There is no reason whatsoever to doubt NATO’s commitment and America’s bond with Europe."

After the end of the Cold War ended, or the confrontation between NATO and the communist Warsaw Pact in Europe, the US reduced the number of their troops in Europe from 230,000 to 81,000. Europe mainly serves as a logistics and supply base for US forcers operating in the Middle East and western Asia. The German defense minister says the withdrawal has by no means lessened Europe’s security and is in response to new military threats. Other NATO states, including Germany, are also downsizing their armies and closing military bases. "You can hardly criticize the Americans for doing the same thing," said a NATO diplomat in Brussels.

US Defense Secretary Leon Panetta underlined that Europeans will likely see more US soldiers in future because the two large bases in the German towns Baumholder and Grafenwöhr will continue to be used for preparing troops ahead of missions. "A lot of money was spent to establish and supply these bases with expensive logistics. The Americans would be unwise to give that up," said a NATO diplomat. . . .

Establishing the center for NATO’s planned missile defense shieldin Ramstein, in the state of Rhineland-Palatinate, was not meant as a compensation for the planned troop withdrawal, say NATO officials. US Air Forces in Europe and NATO’s Allied Air Command already had their headquarters in Ramstein and it was therefore only logical to base the missile defense shield there as well. A spokesperson for Ramstein Air Base said personnel would most likely be raised from 400 to 500 and that the expansion would take at least two years.

The new NATO command structure, which was created out of pressure to cut costs and to better serve new NATO tasks, was approved in the summer of 2011. In order the keep the NATO command in Ramstein, a similar base is set to be closed in Izmir, Turkey. No new rocket firing systems will be installed in Ramstein; instead, there will be new computer systems capable of linking and evaluating data from early warning radar systems from all over Europe.  (photo: Getty)