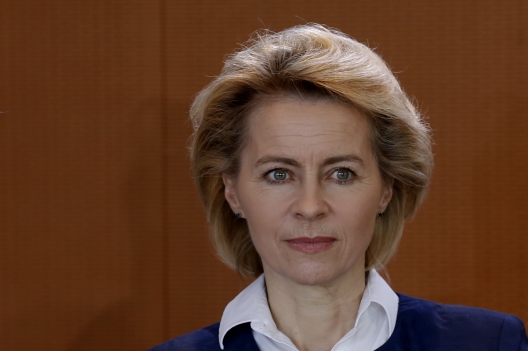 SPIEGEL: So is the Ukraine crisis a case for defense policy?

Von der Leyen: Ukraine isn’t NATO territory, but Vladimir Putin has destroyed an enormous amount of trust with his conduct. That’s why we have to take the concerns of our Eastern partners very seriously.

SPIEGEL: Last week, United States President Barack Obama announced a strengthening of the American military presence in Eastern Europe. Can this contribute to finding a solution to the crisis?

Von der Leyen: I welcome Obama’s announcement. It is a sign of America’s engagement for Europe and the trans-Atlantic alliance …

SPIEGEL: … it means that Europe’s military capacities will be upgraded. Is that the right approach?

Von der Leyen: The primary thing we have to do is provide security for our Eastern partners. We Germans know what it meant to live on the border of the Warsaw Pact countries. The Allies provided us with security so that a prosperous West Germany could be created. We haven’t forgotten that.

SPIEGEL: Are we falling back into the Cold War era?

Von der Leyen: No. But the situation is serious. Russia has destroyed a massive amount of trust. At the same time, there are many crises that cannot be solved without Russia in a globally networked world. That’s why we need to do everything we can to help Russia find its way back to a policy of dialogue.

SPIEGEL: Is Russia really a partner still, or has it become an adversary?

Von der Leyen: Currently, Russia is not a partner. Partners adhere to joint agreements. Still, it is also true that Russia cannot be allowed to become our opponent.

SPIEGEL: The Western military alliance is currently in the process of sending a military message to Russia.

Von der Leyen: NATO is the world’s strongest alliance and has proven over the decades that it can adjust to new threat scenarios. Its philosophy is to use its position of strength to engage in dialogue. The hand that has been extended to Russia has to come from a position of strength.

SPIEGEL: Does NATO now need to adapt to a new threat? The Baltic states and Poland want NATO combat troops in Eastern Europe, but that would affect the Basic Treaty with Russia. What is your position?

Von der Leyen: Even if Russia unilaterally violated the document, we should still comply with it. Rules that we once created shouldn’t be abandoned frivolously. They can provide the basis for a new beginning. Even a rocky basis is better than none at all. It is important for Poland and the Baltic states that NATO be able to react swiftly. It is possible to provide that already today without permanently stationed units.

SPIEGEL: Would it be possible for NATO to defend the Baltic states in a conventional way with its current positioning?

SPIEGEL: Our own reporting indicates that politicians and members of intelligence services in many NATO member states view the situation differently.

Von der Leyen: Let me reiterate: NATO is the world’s strongest military alliance. President Putin knows that NATO stands solidly behind its Eastern members. That’s why he won’t touch the sovereignty or integrity of these countries.

SPIEGEL: What is the Bundeswehr, Germany’s armed forces, doing to contribute to overcoming the crisis?

Von der Leyen: The Bundeswehr is participating in NATO measures to provide security for the Baltic states. We are leading the NATO minesweepers in the Baltic Sea and we will also participate in the monitoring of air space beginning in September. We were the first NATO member state to come up with a concrete proposal together with Poland and Denmark for reinforcement measures in the mid-term. And we are reinforcing the Multinational Corps Northeast in Szczecin, Poland, so that NATO can react more quickly in the alliance’s eastern territories. This has all been recognized.

SPIEGEL: You are planning on sending 50 additional soldiers to Szczecin, which is located right on the border to Germany and, as such, is one of the western-most locations in Eastern Europe. Is there any more to this than token politics?

Von der Leyen: There’s much more behind this. We’re just beginning the detailed planning. The Corps Northeast stands for NATO’s ability to adapt. It is multinational, rotating and flexible. The troops continue to be distributed across Europe, but they conduct joint exercises and are prepared in emergency situations to act jointly. That is the modern NATO philosophy, which is no longer about the static stationing of large troop formations. That is an antiquated Cold War concept. . . .

SPIEGEL: The US is playing a less dominant role in global security policy than in the past. What does this mean for Germany?

Von der Leyen: The US is still an important partner. That’s why Obama’s announcement to act within alliances is a good sign. Germany will exercise its responsibility within NATO and the EU.

SPIEGEL: In statistical terms, the opposite is true at the moment. A few years ago, some 10,000 German soldiers were deployed on missions abroad. Today, less than half that figure is deployed.

Von der Leyen: The number of soldiers deployed says little about how involved Germany is internationally. There are other indicators.

Von der Leyen: It’s not always just about the military. It’s also about a general attitude of whether one is prepared to assume responsibility. I learned a lesson from the German government’s decision to abstain in the United Nations Security Council during the Libya crisis in 2011. It triggered strong resistance internationally. That’s why I share the position of Germany’s president and foreign minister, both of whom have said that Germany must be more engaged. That is also happening. But you can’t win back trust overnight.