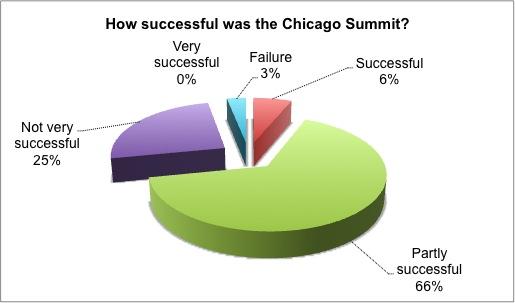 From Joerg Wolf, Atlantic-Community.org:  The heads of state and government of the NATO member states had three priorities in Chicago: the mission in Afghanistan, military capabilities and international partnerships. Atlantic Initiative surveyed 32 German experts between May 23rd and June 7th from think thanks like the German Institute for International and Security Affairs, the German Council on Foreign Relations and the European Council on Foreign Relations; from universities in Hamburg, Berlin and Munich; and from media sources like Frankfurter Allgemeine Zeitung, Augen Geradeaus and the Global Europe. . . .

A large majority of those surveyed had lower expectations for the Smart Defense initiative. Secretary General Rasmussen wants to respond to the financial crisis with a renewed culture of cooperation. Member states should strengthen their military capabilities through multinational solutions and more efficient investments.

Nevertheless, none of the experts are of the opinion that the initiative will become the new way in which NATO does business by "building capabilities together". Only one in five experts surveyed think the initiative will ‘produce innovation but not until at least five years from now’; this was the second positive option available. The negative assessments prevailed: 17% believe Smart Defense would provide an excuse for the allies to make further defense budget cuts, and 33% claim it will mask NATO’s inability to make necessary reforms. Moreover, the results of the experts who selected "Other Answers" are overwhelmingly skeptical as well; altogether 72% of those surveyed could be considered pessimistic and only 19% as optimistic.

An international group of 60 experts, who were asked the same question by the Atlantic Council and the magazine Foreign Policy in the lead-up to the Chicago Summit, were clearly more optimistic. There were just as many positive assessments of the Smart Defense initiative as negative ones.

The majority of those surveyed believe that NATO’s priority of strengthening international partnerships was achieved to some extent in Chicago (53%). Almost as many of those questioned (47%), however, are of the opinion that the Alliance was not at all able to do this.

Two-thirds of the foreign policy experts consider the Chicago Summit to be "partly successful". A quarter of them view the Summit to be "not very successful", although only one participant considered it a failure.