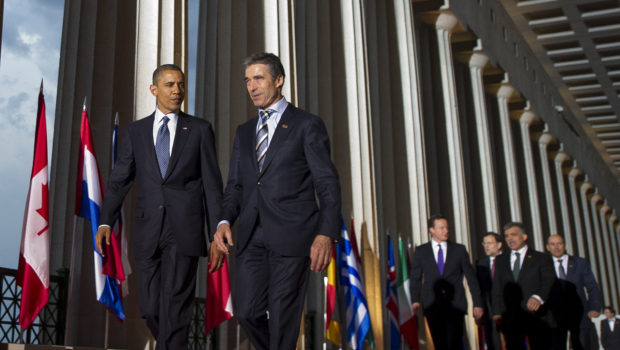 From Matthias Gebauer, Ralf Neukirch, Gordon Repinski and Christoph Schult, Spiegel:  With unprecedented bluntness, a confidential analysis by the German Foreign Ministry reveals how few of the programs that were announced at the NATO summit in Chicago last year have been implemented. "It has not been possible to achieve any consensus in core areas," the document reads.

The report lists in detail the challenges the alliance must overcome, from poor cooperation to missile defense to the lack of funding for an effective security policy. The authors conclude that progress is moving at "a snail’s pace."

The inertia at NATO is out of proportion with the speed at which the global balance of power is changing. The Americans, for example, are turning their attention to the emerging Asian economies, which are also becoming stronger militarily.

Washington, for its part, is increasingly unwilling to assume a growing share of the defense of Europe and its interests. "The burden sharing between the United States and the rest of the alliance has become more and more imbalanced," [NATO Secretary General Anders Fogh] Rasmussen wrote two weeks ago in an internal letter to NATO ambassadors. "If this continues, it could weaken support for the alliance in the United States. . . ."

At last May’s summit in Chicago, the NATO leaders announced major new goals. The communiqué stated that NATO would enhance its cooperation with the European Union. In the interest of reducing costs, the individual members promised to better coordinate their respective defense projects. The Europeans pledged to improve their military capabilities. According to the document, the alliance was embarking on nothing less than a "new age of cooperation."

But these were empty promises. When NATO defense ministers met in Brussels last Thursday to launch the key initiatives of the Chicago summit, they couldn’t even agree on the basic working documents. The implementation report for the "Chicago Defense Packet" was put on ice. "This must be viewed as a significant setback for ‘Chicago,’" said a German diplomat.

In Berlin, others are blamed for the development. Especially the "seemingly incompatible positions of a few nations" with the mainstream of NATO partners is obstructing progress in key areas, the Foreign Ministry analysis concludes. The nations in question are France and Turkey, and there is a lot more at stake than differences over individual issues. "In particular, there is still one unanswered question: ‘Quo vadis, NATO?’ . . ."

The French, for example, have issues with NATO’s planned missile defense system. According to the German Foreign Ministry analysis, the French government’s "strong emphasis on national sovereignty" is an indication that Paris is uninterested in consensus. When push comes to shove, the nation state is more important to Paris than joint defense efforts.

The same applies to Turkey. According to the German report, a key problem is the Turks’ refusal "to constructively support the concept of partnership." The negative assessment by the diplomats refers to the rigid stance taken by Ankara, which refuses to cooperate with NATO partner Israel and is also blocking cooperation with the European Union because of the Cyprus conflict.

It was because of this stance that the Turkish representative chose, at the last minute, not to approve key documents associated with the NATO projects last week. "The fundamental differences make an agreement impossible at the present time," the Turkish NATO embassy in Brussels informed the allies. . . .

"Initial feedback shows that all nations face significant problems when it comes to assuming the planned burdens," reads the Foreign Ministry analysis. Officials in most European capitals hope that when push comes to shove, Washington will not abandon it allies.

Nevertheless, last week the Americans unofficially let their partners know that US President Barack Obama is not willing to put up with Europe’s stance any longer. At Washington’s insistence, a special NATO summit will be held in June. At that meeting, Obama wants German Chancellor Angela Merkel, French President François Hollande, British Prime Minister David Cameron and other European leaders to make a public commitment stating which of them will assume which additional costs. . . .

There is in fact hardly any important issue on which the partners aren’t blocking each other. For instance, there has also been no progress on one of the alliance’s showcase projects, the planned missile defense system. The dispute revolves around the question of how non-NATO countries are to be integrated into the project. The United States, Turkey and the Baltic countries are mainly interested in discussing operational issues. Other countries, most notably Germany, France and Italy, are calling for a political approach and want to involve Russia, which takes a critical view of the missile defense plans. "Progress in the area of missile defense, as one of the flagship issues in Chicago, has been disappointing," according to the German analysis.   (photo: Saul Loeb/AFP/Getty)