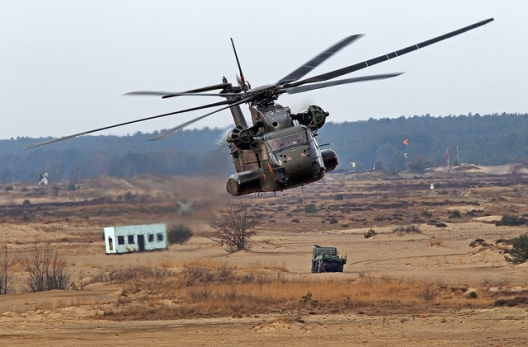 [T]he Russian threat to European stability has galvanised backing for a more active military. A recent YouGov poll showed 49 per cent support for increased defence spending, versus 36 per cent against. Christian Mölling of the Berlin-based SWP think-tank says: “We didn’t really understand about sending expeditions to other parts of the world. But this is the old narrative about the defence of our homeland.”

After limiting defence spending for 25 years, Berlin will boost the military budget by 6 per cent over the next five years, starting with a €1.2bn increase next year to €34.2bn….

“The Kremlin’s behaviour has put the importance of the Nato defensive alliance before our eyes. We thought for years we would not need to defend our borders, but now the facts show otherwise,” says Henning Otte, parliamentary defence spokesman for chancellor Angela Merkel’s ruling CDU/CSU bloc.

Ursula von der Leyen, defence minister and seen as a possible successor to Ms Merkel, has put Russia at the centre of her strategy. “The Kremlin’s new policy began long before the crisis in Ukraine and will occupy us for a very, very long time to come,” she said earlier this year, announcing a planned new defence white paper….

The Nato element is politically vital. Mindful of the Nazi past, Berlin is restrained in projecting its power abroad and does so only with allies. It is also concerned about provoking Russia: at last year’s Nato summit it blocked efforts by eastern European states to have western powers station heavy weapons in former Soviet-bloc countries.

The quid pro quo is a hefty German commitment to a new Nato unit — the Very High Readiness Joint Task Force (VJTF) — for deployment to eastern European crisis spots. Berlin is supplying 1,000 troops to a 5,000-strong brigade (supported by air, sea and special forces), which is later planned to be expanded to 30,000 soldiers.

The Szczecin headquarters would serve as the command centre for VJTF deployments in the Baltic region, including the vulnerable Baltic states.

[German general Lutz] Niemann, whose service began in the cold war, says Germans are ready for the new challenge. “I have no doubt about it. There is no question of history [stopping us]. This is not Germany post-1945 any more. We have enjoyed the solidarity of our partners during the cold war and now our partners deserve our solidarity.”