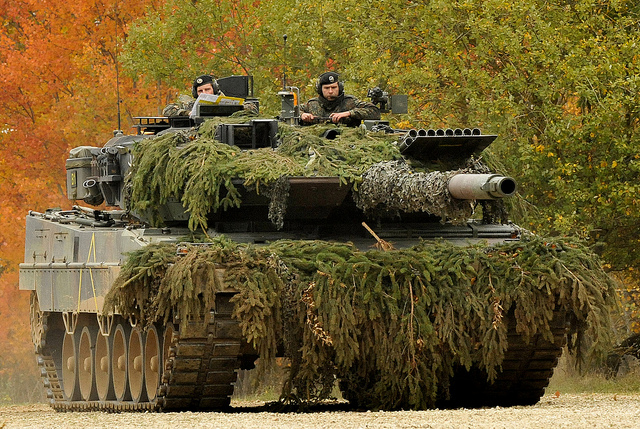 Since 1990, the Bundeswehr has been undergoing constant reform. Main drivers of these reforms were the incorporation of the East German army (German Democratic Republic’s National People’s Army) into the Bundeswehr, the adaptation to new tasks in a changed security landscape after the Cold War, and the constraints of a limited defense budget. In fact, the military and the German ministry got so tired of the unending reform cycles that Thomas de Maizière, current minister of defense, prefers instead to call his reform a new orien-tation [Neuausrichtung]. Tellingly, this latest wave of -Bundeswehr reform did not originate with a security-political decision by the defense minister but with a budget decision by the finance minister. . . .

In an effort to ease the budgetary squeeze, de Maizière proceeded to trim ministry structures and to downsize the armed forces. Upon completion of his new orientation in 2017, the Bundeswehr is envisioned to consist of no more than 185,000 active duty military and 55,000 civilian employees (down from 250,000 and 75,000, respectively, in 2010), with 10,000 soldiers deployable simultaneously in two areas of operation (up from 7,000).[6] In the new personnel structure, the army, air force, and navy will consist of approximately 62,000 soldiers, 32,000 airmen, and 16,000 sailors, respectively, and the Joint Support Service and the medical service will consist of roughly 46,000 and 19,000, respectively.[7] (The remaining members are distributed among equipment, infrastructure, human resources, and other services.) . . .

Of 185,000 troops, the government is only aiming to deploy a maximum of 10,000. That is a low level of ambition, even if one takes into account that to deploy 10,000, an additional 20,000 will be either in preparation and training to deploy or resting from a previous deployment. The political decision to limit each tour to just four months (instead of the more common six to eight) adds further pressure on personnel planning. And, finally, it should be noted that having a capability to deploy 10,000 personnel is the defense ministry’s stated goal; it remains unclear whether it will be achieved. . . .

[T]he direction of de Maizière’s reform is sensible: focus on deployability, create leaner and more flexible forces, push for better cooperation among EU and NATO partners, and emphasize the need to be able to actually fight. So when the Atlantic Council states that “German military weakness is NATO’s most significant problem,” one could easily think of weaker and faster declining powers within the alliance—and more significant problems, too, such as diverging threat perceptions among most members. Still, there is something to the charge brought forth by the council and others. The numbers—stable as they may be—are not impressive for a state of Germany’s size, location, wealth, and political power. They are, of course, even less impressive in comparison to the increases in the defense budgets of rising powers such as China, Brazil, and India. If Germany will one day be able to send 10,000 soldiers into combat abroad, equipped with some of the remaining Leopard 2 tanks, or to deploy abroad a dozen brand-new Eurofighter Typhoons (a nonstealthy aircraft of disputed competitiveness), will it make much of a difference?

One of NATO’s lessons from the 2011 war in Libya is that without US support, the European allies, led by Britain and France, could not mount a sustainable campaign for lack of ammunition and planes, among other things. Germany did not participate in that operation against one of the world’s weakest militaries, but in terms of more effective air-defense suppression and close-air support, it would hardly have improved Europe’s performance in any case.

That Germany did not even try to make a difference in this UN-mandated NATO mission makes matters worse. It is indicative of a disconnect between the country’s strategic interests and its political will to use force. For every step forward toward a normalization of German security policy (Kosovo and Afghanistan), there is a step backward (utterly restrictive rules of engagement and Libya). When German armed forces are sent into international missions, it is usually first and foremost explained to the public as a necessary act of solidarity with Germany’s allies. Although this is a good argument, it should never be a substitute for a lucid formulation of German interests and a clear-eyed analysis of the threat to be countered.

One emerging threat is the increasing weakness of the European states when it comes to their hard power capabilities and thus their ability to secure their own periphery, let alone their global strategic interests. Germany, as the undisputed economic powerhouse and central political actor in Europe, would be well advised to lead the charge in reversing this dangerous trend. This, however, would require much stronger leadership on German security policy than the country has enjoyed over most of the last two decades.

Excerpts from “German hard power: Is there a there there?”   Patrick Keller  ([email protected]) is the coordinator of foreign and security policy at the Konrad Adenauer Foundation in Berlin, Germany.