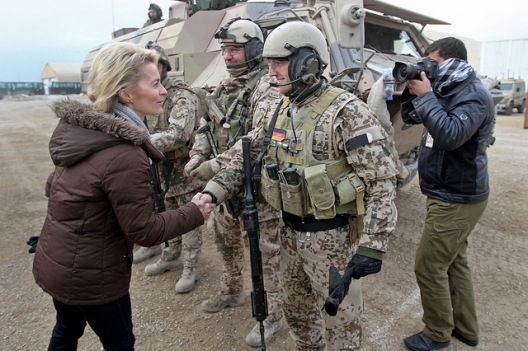 This reduction of around €800 million is about twice as much as the government of Chancellor Angela Merkel had envisaged in its budget draft this March.

According to a budget committee report, the reason for the additional cut in the defense budget was delays in major armament projects. Earlier this year, Defense Minister Ursula von der Leyen had taken the first steps to check these incidents and dismissed the state secretary responsible for the armament sector. She also ordered a review of the 15 largest procurement projects, such as the Eurofighter, and the entire armament process by a civil management consulting company.

These were part of various measures to close a gap in the federal budget of around €3 billion without raising taxes. For the current year, the federal budget is supposed to be €296.5 billion, which includes €6.5 billion in new debt. In 2013 the debt level was around €22 billion. For 2015, the German government seeks a balanced budget. . . .

[V]on der Leyen said during her recent visit to the US that the defense budget will rise in the coming years. Although it is still expected to fall short of NATO’s spending guidelines of 2 percent of gross domestic product, she argued that the percentage of GDP spent on defense is less important than how the money is spent.

The Bundestag will cast its final vote on the federal global budget this coming Friday and approval appears certain. Afterwards the Bundesrat, the German upper house which represents the federal states, is expected to pass the budget.