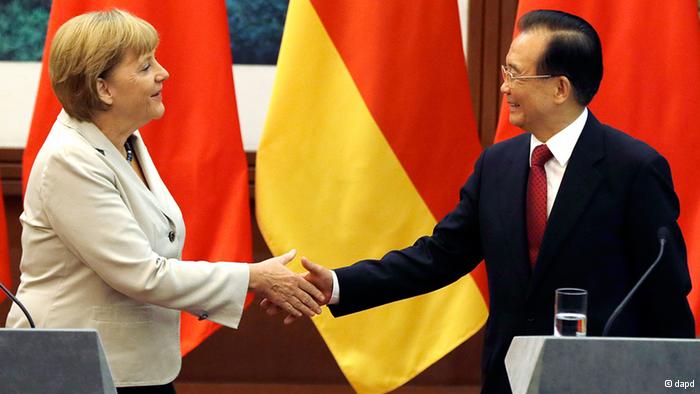 From Stephan Richter, the Globalist:  Now that the German Chancellor is once again visiting China, accompanied by scores of her top ministers and an outsized contingent of CEOs, the world is beginning to take note.

The Chinese are extremely meticulous when it comes to symbolic moves and announcements. Every step they take, especially regarding expressing favor or disfavor, is calculated to the nth degree. Such is the hallmark of a highly refined, court-centered political culture that reaches back thousands of years.

Thus, when the two countries announced two years ago — in July 2010, during Angela Merkel’s fourth visit to China as German Chancellor — that that they would start a strategic dialogue, it was a significant event.

At the time, most of the world did not notice that the Chinese leadership had just anointed a nation other than the United States the privileged status of conducting a "strategic dialogue."Such announcements can easily be meaningless. Moreover, the Chinese favor arranging world affairs in such a manner. They like to maintain a multitude of different relationships simultaneously. The size of the country’s population naturally puts China at the center of the various overlapping country pairings. . . .

The personal dimension aside, what should the world make of the Chinese-German relationship?

Is it a crafty Chinese charm offensive to which the gullible Germans are succumbing?

A strategic summit of two mega-mercantilists?

The natural consequence of the economic confusion in present-day Europe?

Or no big deal whatsoever?

To be sure, the Chinese, for the time being, are tired of the constant European hoopla. Since China’s national interest is completely tied to stability of the world economy, they understandably want to talk to the key person on handling the euro crisis. Mrs. Merkel is just that.

But the French, British and the Americans would delude themselves if they believed it was just that one factor that attracts the Chinese to the Germans. . . .

Another reason for the Chinese to raise Germany to an elevated partner status relates to counterbalancing the United States, which is a natural Chinese interest.

The two countries’ leaderships share a genuine concern that the political situation inside the United States is so disjointed that there are very real doubts about the continued ability of the United States to manage world affairs.

Even more worrisome is the question of whether the United States is actually able at this point to pursue a rational course on key domestic policy initiatives, such as fiscal policy.

But the Chinese are realists. Their ambition is not to unhinge the Germans from their alliance with the United States. Rather, it is about the hope that, by partnering with Germany, Chinese arguments regarding the future stability-oriented path of the global economy will have more weight in the G20 and other international forums.   (photo: dapd)