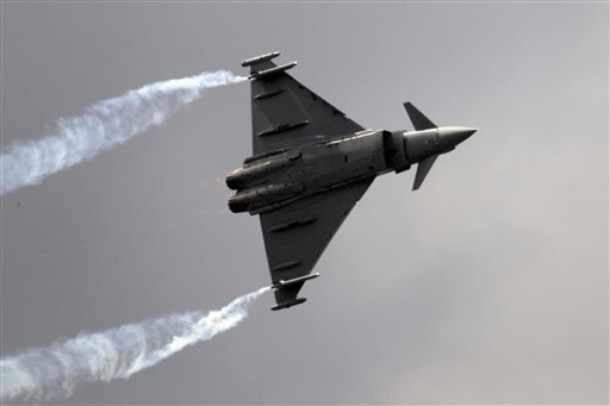 From Albrecht Müller, Defense News:  In the wake of its military restructuring, Germany could sell some of its used Eurofighter jets to Eastern European countries. The Financial Times Deutschland newspaper reported on Jan. 4 that Bulgaria is interested in acquiring eight aircraft.

According to the newspaper, the topic could be raised during the visit of Bulgarian Prime Minister Bojko Borissow Ende to Berlin at the end of January.

Other Eastern European countries, such as the Czech Republic, Croatia, Slovakia and Romania, are also looking at similar options, said the newspaper.

The Czech military is currently leasing 14 supersonic jet fighters, the JAS-39 Gripen made by the BAE Systems-SAAB consortium, from the Swedish government; with that  contract due to expire in 2015, speculation has been mounting about whether that leasing agreement will be renewed or another type of fighter plane chosen.

The Czech Ministry of Defense has denied having negotiated with its German counterparts, the news server iDNES.cz reported. “I can completely exclude that talks have taken place, even a [informal] probing,” ministry spokesman Jan Pejšek was quoted as saying, leading the publication to speculate that Germany was floating trial balloons to tell the world its old Eurofighters were on the market.

Czech Prime Minister Petr Nečas (Civic Democrats, ODS) has showed little enthusiasm for extending a Gripen deal, warning in June 2011 that it would be difficult to imagine renewing the contract when an investigation about alleged massive corruption relating to the original deal — to buy 24 JAS-39 fighters over several years — has yet to be concluded. That deal was dumped by the Czech parliament in 2003 in favor of the leasing option (at a cost of Kč 20 billion, one-third what it would have cost to buy the planes).  (photo: AP)