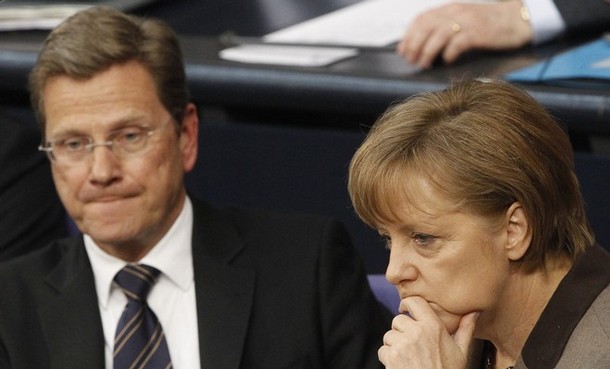 From Stephen Brown and Matthias Sobolewski, Reuters:  [Foreign Minister Guido] Westerwelle sought to mollify Germany’s NATO allies like France for not backing them on Libya, by saying he "understands and respects our partners in the Security Council, the European Union and in the Arab League who, after weighing up all the arguments, came to a different conclusion than we did".

A proposal to send more German crews to Afghanistan to free up their American counterparts was being discussed in [German Chancellor Angela] Merkel’s coalition on Friday, German coalition sources said.

NATO is operating 24-hour surveillance of Libya with AWACS reconnaissance aircraft which are based in Germany, and about a third of the NATO AWACS crews are Germans. Boosting Germany’s AWACS crews in Afghanistan would require parliament’s approval, which could take some persuading since the Afghan mission is increasingly unpopular and the last annual vote on extending it showed growing resistance.

But Merkel and Westerwelle would have a tougher time still convincing parliament to approve involvement in another foreign campaign in Libya, especially when they are struggling to defend their hold on state governments in six regional elections.  (photo: Reuters)