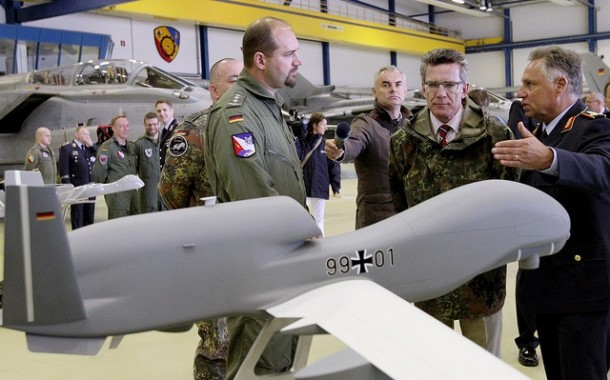 From Judy Dempsey, Strategic Europe: [A] botched and expensive project to produce a drone system for the Bundeswehr could be [Defense Minister Thomas] de Maizière’s undoing. It is even possible that he will have to step down. Were this to happen, it would not only demoralize the Bundeswehr, but would also destroy any chance that Germany might in the near future start thinking strategically about the role of its armed forces. . . .

Germany was under a lot of pressure to agree to the deal. Its NATO partners, and the United States in particular, were still angry over the fact that, as a member of the UN Security Council in 2011, Germany had not voted in favor of a no-fly zone over Libya.

But Germany was already separately developing the Euro Hawk, at enormous cost. This transatlantic project between Northrop Grumman and the European defense corporation EADS was designed to produce a prototype of the high-altitude, long-endurance Global Hawk for the Bundeswehr. The new drone would have additional signals intelligence.

Surprisingly enough, the project was begun back in 2004 by Germany’s Social Democrat–Green coalition. . . .

Euro Hawk has two big problems. First, it does not meet the standards of the European Aviation Safety Agency (EASA). High-altitude drones need sophisticated equipment that will prevent them from colliding with conventional aircraft, losing control, or getting lost. For Germany, this would mean spending another €600 million ($772 million) on equipment, according to experts.

The second snag is the EASA certification, for which Germany would have to fork out another substantial sum. What is more, Northrop Grumman was not prepared to provide certain technical documents for the certification process, which is quite remarkable given the long cooperation between the U.S. firm, EADS, and the defense ministry.

“The whole thing is a scandal. As if the defense ministry and the chancellery did not know what was needed to make the Euro Hawk workable,” said Elke Hoff, defense spokeswoman for the governing Free Democrats’ parliamentary group.

Of course, the controversy over the Euro Hawk is fueled by the fact that 2013 is an election year in Germany. The opposition Social Democrats are determined to try and dent Merkel’s immense popularity—and de Maizière’s, too. If he wants to avoid the fate of many of his predecessors, he has much explaining to do before the parliament’s defense committee, which will meet early next month.  (photo: Die Welt)