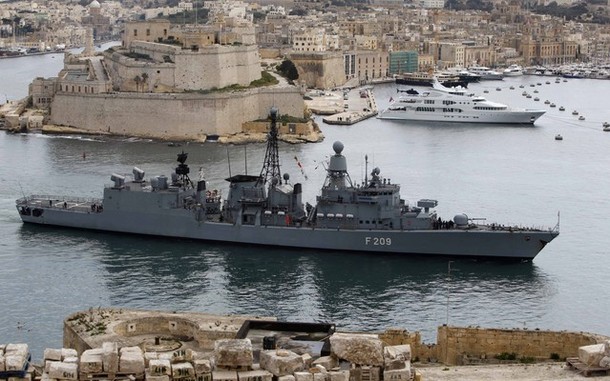 From DPA:  NATO ships in the Mediterranean will begin operations to enforce a UN-mandated arms embargo on Libya , the alliance said Tuesday, as the alliance remains divided over whether to take the lead in commanding the no-fly zone over the country.

NATO Secretary General Anders Fogh Rasmussen said in a statement that the alliance will monitor sea traffic in the region and intercept vessels suspected of carrying illegal arms or mercenaries.

"All allies are committed to meet their responsibilities under the United Nations resolution to stop the intolerable violence against Libyan civilians," he said.

NATO’s decision prompted Germany, reluctant to play a military role in Libya, to immediately announce it was pulling out of alliance operations in the Mediterranean. Four ships will be returned to German command, a Defence Ministry spokesman in Berlin said.

"Because there is a component to the arms embargo that envisages the use of force if necessary, Germany decided it would not be part of such action," the spokesman said.

From the AP: Because of the risk of getting drawn in, the Defence Ministry said Tuesday Germany was putting two ships and two smaller boats with a total of some 550 sailors in the Mediterranean back under national command.

It also is pulling out between 60 and 70 German airmen from NATO AWACS surveillance aircraft involved in Operation Active Endeavor, in which the alliance monitors and escorts shipping across the Mediterranean to deter terrorist activity.

UPDATE from DPA: In one of this week’s paradoxes, the opposition Greens, once founded as a pacifist party, pounced on Merkel and demanded she return German warships to the NATO fleet and enforce the UN arms embargo on Libya.

Within Merkel’s own party, the Christian Democratic Union (CDU), pro-NATO politicians were infuriated by the chancellor’s decision. She admitted this week she had faced a ‘lively debate’, diplomatic German for a row, afterwards behind closed doors.  (photo: Reuters)