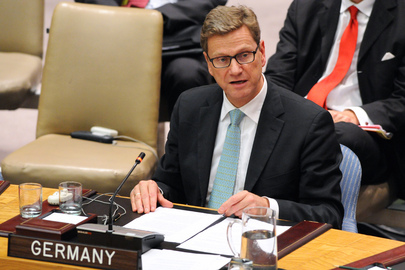 From Ralf Neukirch, Spiegel:  March 17 of this year. That was the day on which the Security Council passed its Resolution 1973 on Libya, which called for the implementation of a no-fly zone and the use of military force to protect the civilian population. All Western and African members of the council voted in favor of the resolution. Except for one.

[Peter] Wittig, the German UN ambassador, was forced to abstain from the vote, on instructions from Berlin. It was a decision which redrew the Security Council alliances — Germany suddenly found itself grouped together with Russia, China, India and Brazil. More than that, the vote represented a break with Germany’s foreign policy maxim to never oppose its European partners and the United States.

It was just one year ago that Germany was elected to serve a two-year stint as a non-permanent member of the council. The choice was seen as Foreign Minister Guido Westerwelle’s greatest success to date. And it was intended as a first step on the road to a UN reform and a permanent German seat on the council.

But with Westerwelle in New York this week to attend another session of the UN General Assembly, Germany’s record on the Security Council to date is worse than even the greatest pessimists had expected. The Germans had hoped to portray themselves as a force for good and to exert a positive influence on Western policies. Instead, Berlin must now prove to its partners that it remains reliable. Germany, at the moment, has little leeway at the UN. . . .

Both Westerwelle and Chancellor Angela Merkel underestimated the impact of their strategy of avoidance when it came to Libya. "If there was a message behind Germany’s decision to abstain, we didn’t hear it," says one diplomat in New York. "We were all very disappointed."

Even prior to the Libya vote, Germany had become aware that even its closest allies were not willing to grant Berlin a special role. The Germans wanted to be involved in preliminary discussions among the French, British and Americans, as the Security Council veto holders established their position for future sessions. But Berlin was coolly and decidedly rebuffed. Instead, the Western powers merely promised to keep Germany informed.

Indeed, from the perspective of New York, German influence is extremely limited. A different hierarchy prevails in the UN than in the European Union, even among the Europeans. The Germans and the French are the closest of partners in the EU; at the UN it is Paris and London. . . .

But Germany has no partners other than its traditional allies, and that too is a lesson from its tenure on the Security Council. Westerwelle had made it his goal to refute that reality. He wanted to upgrade regional powers like India, Brazil and South Africa to be strategic partners that could support Germany on the occasions when it was not in agreement with the Europeans or Americans. What’s wrong with being in the company of Brazil and India, Westerwelle asked himself after the Libyan decision?

The answer, after the eight months Germany has spent with these countries on the Security Council, is plenty. The two countries may share many of the West’s values. But when it comes foreign policy, their main objective is to demonstrate their independence from the Europeans and Americans.

In the discussion of what to do about Syrian dictator Bashar Assad, the governments in New Delhi and Brasilia are part of the problem, not the solution. They are resisting a tougher resolution. And in the conflict over the Iranian nuclear program, Brazil, in particular, has not proven very helpful on the Security Council. In the end, Germany is indeed dependent on its traditional allies. . . .

Translated from the German by Christopher Sultan.  (photo: UN)