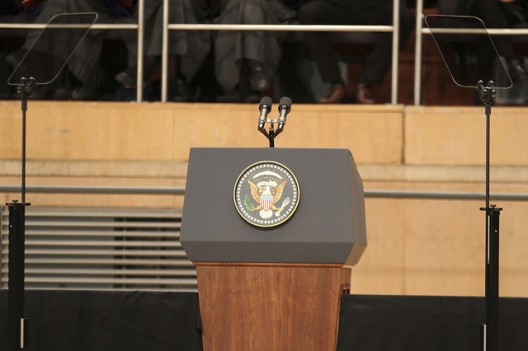 [T]he most important emerging theme in world politics is America’s slow retreat from its role as global policeman.

Some of America’s closest partners now talk openly of a diminished US global presence. Laurent Fabius, the French foreign minister, recently gave a speech in which he said: “The United States gives the impression of no longer wanting to get drawn into crises.” As a result, he said, America’s allies are “increasingly factoring in their calculations … the possibility that they will be left to their own devices in managing crises”. Even Israel is adjusting. Its foreign minister, Avigdor Lieberman, recently remarked: “Ties between Israel and the US are weakening … The Americans today are dealing with too many challenges.” The Israeli analysis is shared by America’s other key ally in the Middle East, Saudi Arabia, which is furious at what it regards as US disengagement.

The deep reluctance of Barack Obama’s administration to get involved militarily in the Syrian conflict has fuelled accusations that America is pulling back from the Middle East. But European policy makers are also worried. They are concerned that America’s famous “pivot” to Asia will mean less attention to Nato and its European partners.

Meanwhile, America’s Asian allies seem no more satisfied. Japan thinks that the US was not firm enough in responding to China’s declaration of an “air defence identification zone” in the East China Sea, while the Philippines feels it was left in the lurch when China established effective control of the disputed Scarborough shoal. . . .

America under President Obama is clearly more reluctant actually to use its military muscle. When Congress debated missile strikes on Syria, Washington quickly became aware that opinion back home was strongly against. The spread of a new semi-isolationist mood was confirmed last week in a poll for the Pew Research Center. Some 52 per cent of Americans agreed that “the US should mind its own business internationally and let other countries get along the best way they can, on their own”; only 38 per cent disagreed. As Bruce Stokes of Pew points out, this is “the most lopsided balance in favour of the US minding its own business” in the nearly 50 years that pollsters have asked this question.

Mr Stokes calls this “an unprecedented lack of support for American engagement with the rest of the world”. What is more, this scepticism about foreign entanglements now reaches into the US policy making elite. When Pew polled members of the Council on Foreign Relations, an elite think-tank, they found their views roughly in line with those of the general public.

Image: Allies concerned about a diminished US global presence (photo: US Embassy in London)