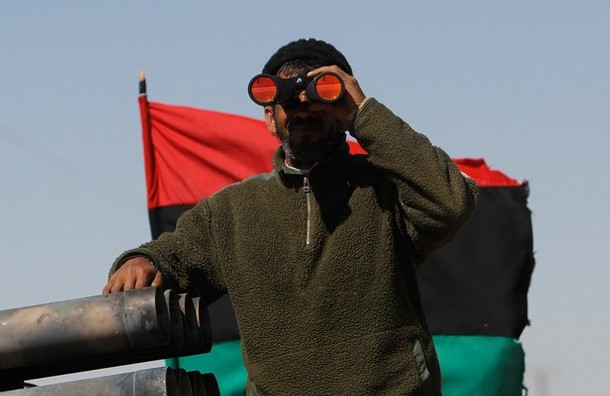 From Christopher Hitchens, Slate:  Stop worrying about an "exit strategy." What America needs in Libya is an entrance strategy. . . .

In a weirdly neutral and vague joint op-ed article, written by heaven knows whom, President Obama, British Prime Minister David Cameron, and French President Nicolas Sarkozy persisted in defining the intervention as an essentially humanitarian one, presumably conducted under the rubric of the United Nations’ nebulous "duty of care" doctrine. They also seemed to persist in saying that "regime change" is not a fully declared objective of the operation. The first claim is being badly undermined by the slow but heavy bleeding that is being inflicted on the wretched inhabitants of Misurata and other towns: a needless and costly prolongation of the agony. And the second claim is absurd on its face: You do not use drones and cruise-missiles against the armed forces of a state, and send weapons to that government’s self-declared opponents, in order merely to modify the regime’s behavior. The direct interference in Libya’s "internal affairs" could not be more blatant than it is. Where is the virtue in pursuing this sporadically, with inadequate firepower, with no serious fighting forces on actual Libyan soil, and in letting the pace of events be dictated by the slowest-moving forces? . . .

The great vulnerability of one-man states—their built-in weakness and our great hope—is precisely the feature that defines them. Terrifying though Milosevic and Saddam were, and impressive though many people found their elite security forces, they proved under serious pressure to be what Mao Zedong used to call "paper tigers." Only one delusional individual had to crack, or be cracked, and it was all over. And, compared with the duo mentioned above, Qaddafi is practically a nonentity. Did you happen to see his recent "Cannonball Run" through the streets, gesticulating hysterically from the back of a pickup? It was many things, but it was not impressive or frightening.

The special forces of almost any NATO state—most certainly those of the United States, the United Kingdom, and France—are more than equal to the task of taking him out on their own. If he can’t be arrested, he can certainly be killed. This doesn’t seem to me to violate the letter or the spirit of, say, the official prohibition on assassination of foreign leaders first promulgated during the administration of President Gerald Ford. Qaddafi is now the commander and symbol of a depraved armed force with which we are engaged in direct hostilities. Like Mullah Omar or Osama Bin Laden, he is a legitimate military target and, if only the international courts would not also be so laggard, a legitimate legal and political one as well.

I have heard it argued that the pursuit of Qaddafi runs the risk of civilian casualties, as I presume in theory it must do. But the failure to target him most certainly means a steady and continuous and increasing flow of civilian deaths. To refuse to soil our hands with this homicidal lunatic is an odd way of keeping them clean.  (photo: Getty)