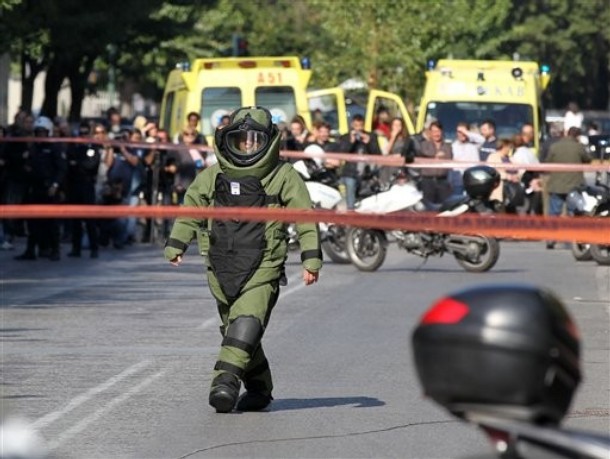 From Michael Slackman and Niki Kitsantonis, the New York Times:  A package bomb addressed to the German chancellor and shipped by air from Greece was found in her office’s mailroom on Tuesday , even as Athens was shaken by a second day of letter bombs aimed at foreign embassies and experts defused explosives addressed to European leaders.

In the aftermath, Greece suspended all mail deliveries to foreign destinations for 48 hours, according to news reports.

Though only one person was injured, and only lightly, and most of the devices were neutralized, the wave of bombs unnerved European officials already scrambling to secure the continent’s air-cargo system after two explosive devices were intercepted en route from Yemen to the United States last Friday. …

Earlier, anxiety spilled over in Athens as officials destroyed one suspicious package at the airport’s cargo terminal. In all, Greek officials dealt with nine confirmed bombs — four on Monday and five on Tuesday — including one addressed to the French president, Nicolas Sarkozy, as well as the embassies of Germany, Switzerland, Belgium, the Netherlands, Bulgaria, Chile, Mexico and Russia. …

Officials in Germany and Greece said they were confident that there was no link between the relatively small letter bombs and the more powerful explosive devices sent from Yemen, which officials believe were sent by an Al Qaeda affiliate there. One of the bombs passed through the Cologne-Bonn airport in Germany before being intercepted at a cargo hub in northern England.

The back-to-back brushes with crisis have challenged Germany’s public posture that it faces a mostly abstract threat of terrorism. German officials have resisted pressure from Washington to be more proactive and public in counterterrorism.  (photo: AP)