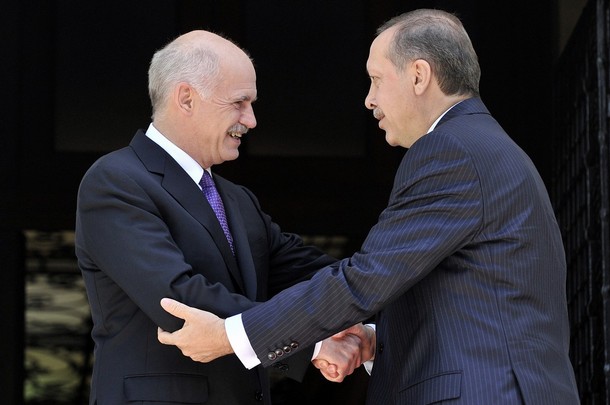 From Reuters: The prime ministers of longtime rivals Greece and Turkey met on Friday to ease tensions and discuss cuts in defence spending, a crucial step for Athens as it struggles with a debt crisis that is shaking the euro.

Prime Minister Tayyip Erdogan arrived in Athens with 10 ministers and about 80 businessmen to begin what both sides hope will be a new era in ties between the two NATO members. …

"We want to proceed to arms reduction under a basic political condition — that Turkey undertakes specific action and practices in relation to respecting international law on Aegean and east Mediterranean issues," Deputy Defence Minister Panos Beglitis told Greek radio. Greece spends a higher proportion of gross domestic product on the military than any other EU member. Western officials, who have put together a 110 billion euro rescue package for Athens, advocate cuts in Greece’s armed forces as a way of reducing spending.

In recent years Greek defence spending reached a high of 5.6 percent of GDP, about 13.4 billion euros ($17 billion). The target for this year is to cut it to below 3 percent of GDP.

According to the International Strategic Studies group Turkey spent $10.2 billion on defence in 2008 and $9.9 billion in 2009, but its economy is forecast to grow faster than any in the EU this year, so Ankara has less need to make cuts.  (photo: Getty)