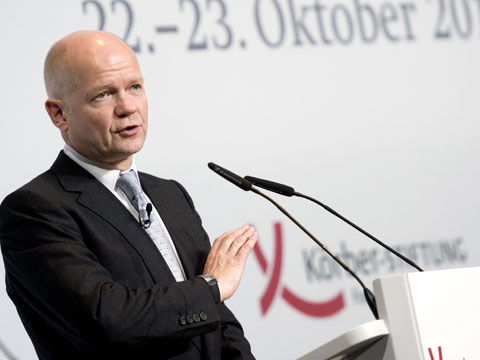 From William Hague, British Foreign Ministry:  Many European economies are stagnant. Weak public finances, and a recovering financial system mean we cannot rely on increased public or consumer spending for growth. The only way our economies can grow is through trade, trade within the EU and outside it. . . .

We should also use to the full our collective weight as the world’s largest trading bloc.  Germany is the largest exporter in Europe and ours is one of the world’s most open economies.  In July, for the first time, British trade with the rest of the world outstripped our trade with the rest of the EU and we want to strengthen both.  Stronger trade relations with emerging powers present huge opportunities.  The EU has free trade negotiations with countries including Canada, Japan, Singapore and India.  If we completed all trade deals currently under negotiation, EU GDP could be increased by up to €60bn a year. We should go further and try to achieve our ambition to conclude an EU-US free trade agreement. We are all looking for economic growth. That would be serious economic growth and there is no other way to provide it.

If we do not succeed in making our economies globally competitive and generating sustainable growth then whatever else we do, whatever treaties we sign, whatever structures we build, whatever declarations we sign, will all ultimately be irrelevant. There will be no Social Europe, there will just be an Excluded Europe. If Europe becomes a neighbourhood of economic decline we will not matter in the world and we will have betrayed the peoples of Europe.  I know that Germany and Finland understand this clearly.  This is a mission for the EU27 and the UK will be at the forefront of this effort.