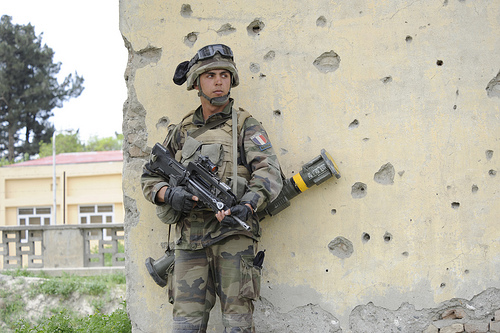 From AFP:   [I]incoming president Francois Hollande will soon have to reassure NATO allies about his decision to end combat earlier than planned.

"I believe that, without taking any risks for our troops, it is the right thing to withdraw our combat troops by the end of 2012," Hollande said last week.

The Socialist leader will bring this message to fellow NATO leaders when they meet at a summit hosted by US President Barack Obama in Chicago on May 20-21, just days after Hollande’s oath of office.

Nevertheless, a diplomat acknowledged that the new leader’s stance "was not warmly welcomed" at alliance headquarters. . . .

But the early French pullout challenges NATO assurances that there would be no "rush to the exit" in Afghanistan, even though the war is unpopular in the West after a decade of fighting that has killed almost 3,000 foreign troops. . . .

Canada and the Netherlands have already switched to training missions while Australian Prime Minister Julia Gillard indicated last month that her troops could begin leaving as early as next year. . . .

Francois Heisbourg, special advisor at the Foundation for Strategic Research in Paris, said the NATO alliance wanted to avoid any drama as it attempted a smooth withdrawal from Afghanistan, even if success was uncertain in the end.

"Everybody is aware of this, and NATO has no interest in creating a controversy" with Hollande, he said. "The priority is to avoid giving the impression of a disorderly withdrawal."

A senior NATO military official said the Afghan transition would be "fairly well managed" despite Hollande’s plan, as commanders had already anticipated the possibility that he might be elected and prepared accordingly.

NATO military planners "are paying attention to various nations and political situations all the time," the official said.   (photo: ISAF)