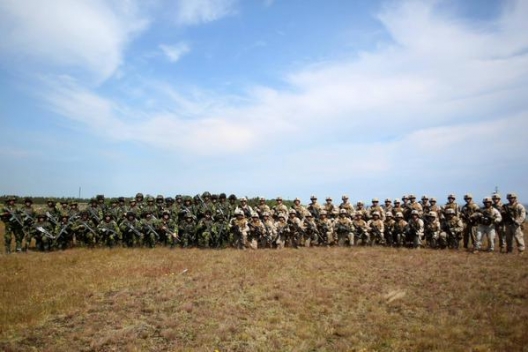 This month more than 15,000 troops from 22 nations are taking part in Allied Shield, a series of exercises designed to test the strength and readiness of NATO and allied armed forces.

In the Baltic Sea, 50 ships and submarines and more than 50 aircraft from 17 countries are taking part in our 43rd Baltic Operations exercise. On land in Poland, Lithuania, Latvia and Estonia, a further 6,000 troops from 10 nations are taking part in Exercise Saber Strike. In Romania, Exercise Trident Joust is testing our ability to command our forces in the field.

Allied Shield will demonstrate that NATO is able to deploy combat forces anywhere within NATO’s territory within days should a crisis break out or if allies are threatened. It will show the world that this alliance is ready, willing and able to deal with whatever challenges it faces….

By working together, as we are this month in the exercises of Allied Shield, and by investing more in our defense, as the leaders of all member nations have pledged to do, NATO can stand strong against any threat, from wherever it may come.

Mr. Stoltenberg, a former prime minister of Norway, is secretary-general of NATO. Gen. Breedlove, a four-star general in the U.S. Air Force, is the head of U.S. European Command and NATO’s supreme allied commander in Europe.