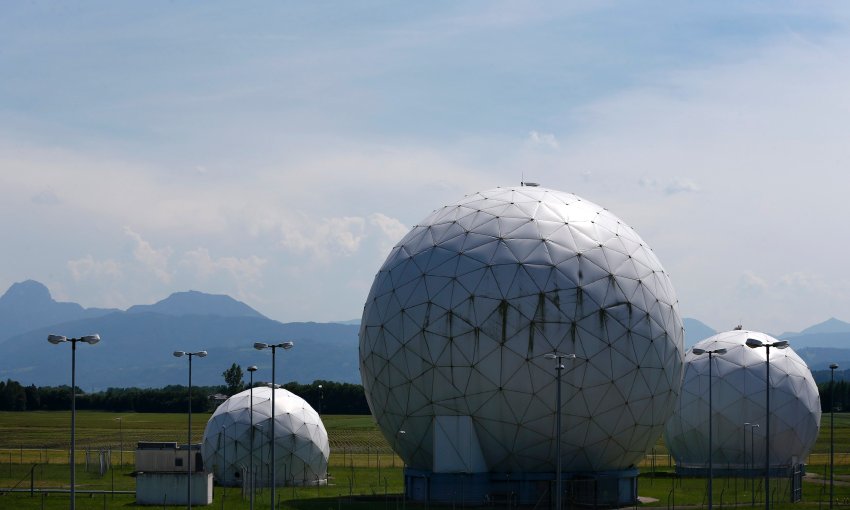 From Laura Poitras, Marcel Rosenbach, Fidelius Schmid, Holger Stark and Jonathan Stock, Spiegel:  [Edward] Snowden has done "irreversible and significant damage" to US national security, [NSA Director Gen. Keith] Alexander told ABC a week ago. Snowden’s NSA documents contain more than one or two scandals. They are a kind of digital snapshot of the world’s most powerful intelligence agency’s work over a period of around a decade. SPIEGEL has seen and reviewed a series of documents from the archive.

The documents prove that Germany played a central role in the NSA’s global surveillance network — and how the Germans have also become targets of US attacks. Each month, the US intelligence service saves data from around half a billion communications connections from Germany.

No one is safe from this mass spying — at least almost no one. Only one handpicked group of nations is excluded — countries that the NSA has defined as close friends, or "2nd party," as one internal document indicates. They include the UK, Australia, Canada and New Zealand. A document classified as "top secret" states that, "The NSA does NOT target its 2nd party partners, nor request that 2nd parties do anything that is inherently illegal for NSA to do."

For all other countries, including the group of around 30 nations that are considered to be 3rd party partners, however, this protection does not apply. "We can, and often do, target the signals of most 3rd party foreign partners," the NSA boasts in an internal presentation.

According to the listing, Germany is among the countries that are the focus of surveillance. Thus, the documents confirm what had already been suspected for some time in government circles in Berlin — that the US intelligence service, with approval from the White House, is spying on the Germans — possibly right up to the level of the chancellor. So it comes as little surprise that the US has used every trick in the book to spy on the Washington offices of the European Union, as one document viewed by SPIEGEL indicates.

But the new aspect of the revelations isn’t that countries are trying to spy on each other, eavesdropping on ministers and conducting economic espionage. What is most important about the documents is that they reveal the possibility of the absolute surveillance of a country’s people and foreign citizens without any kind of effective controls or supervision. Among the intelligence agencies in the Western world, there appears to be a division of duties and at times extensive cooperation. And it appears that the principle that foreign intelligence agencies do not monitor the citizens of their own country, or that they only do so on the basis of individual court decisions, is obsolete in this world of globalized communication and surveillance. Britain’s GCHQ intelligence agency can spy on anyone but British nationals, the NSA can conduct surveillance on anyone but Americans, and Germany’s BND foreign intelligence agency can spy on anyone but Germans. That’s how a matrix is created of boundless surveillance in which each partner aids in a division of roles.

The documents show that, in this situation, the services did what is not only obvious, but also anchored in German law: They exchanged information. And they worked together extensively. That applies to the British and the Americans, but also to the BND, which assists the NSA in its Internet surveillance. . . .

According to insiders familiar with the German portion of the NSA program, the main interest is in a number of large Internet hubs in western and southern Germany. The secret NSA documents show that Frankfurt plays an important role in the global network, and the city is named as a central base in the country. From there, the NSA has access to Internet connections that run not only to countries like Mali or Syria, but also to ones in Eastern Europe. Much suggests that the NSA gathers this data partly with and without Germany’s knowledge, although the individual settings by which the data is filtered and sorted have apparently been discussed. By comparison, the "Garlick" system, with which the NSA monitored satellite communication out of the Bavarian town of Bad Aibling for years, seems modest. The NSA listening station at Bad Aibling was at the center of the German debate over America’s controversial Echelon program and alleged industrial espionage during the 1990s.

The relationship between the US and Germany has traditionally been "as close as it could be," American journalist and NSA expert James Bamford recently told German weekly Die Zeit. "Due to the close proximity to the Soviet Union, we probably had more surveillance stations in Germany than anywhere else."

Just how unscrupulously the US government allows its intelligence agencies to act is documented by a number of surveillance operations that targeted the European Union in Brussels and Washington, for which it has now become clear that the NSA was responsible.

A little over five years ago, security experts discovered that a number of odd, aborted phone calls had been made around a certain extension within the Justus Lipsius building, the headquarters of the European Council, the powerful body representing the leaders of the EU’s 27 member states. The calls were all made to numbers close to the one used as the remote servicing line of the Siemens telephone system used in the building. Officials in Brussels asked the question: How likely is it that a technician or service computer would narrowly misdial the service extension a number of times? They traced the origin of the calls — and were greatly surprised by what they found. It had come from a connection just a few kilometers away in the direction of the Brussels airport, in the suburb of Evere, where NATO headquarters is located.

The EU security experts managed to pinpoint the line’s exact location — a building complex separated from the rest of the headquarters. From the street, it looks like a flat-roofed building with a brick facade and a large antenna on top. The structure is separated from the street by a high fence and a privacy shield, with security cameras placed all around. NATO telecommunications experts — and a whole troop of NSA agents — work inside. Within the intelligence community, this place is known as a sort of European headquarters for the NSA.

A review of calls made to the remote servicing line showed that it was reached several times from exactly this NATO complex — with potentially serious consequences. Every EU member state has rooms at the Justus Lipsius building for use by ministers, complete with telephone and Internet connections.

The NSA appears to be even more unscrupulous on its home turf. The EU’s diplomatic delegation to the United States is located in an elegant office building on Washington’s K Street. But the EU’s diplomatic protection apparently doesn’t apply in this case. As parts of one NSA document seen by SPIEGEL indicate, the NSA not only bugged the building, but also infiltrated its internal computer network. The same goes for the EU mission at the United Nations in New York. The Europeans are a "location target," a document from Sept. 2010 states. Requests to discuss these matters with both the NSA and the White House went unanswered.

Now a high-level commission of experts, agreed upon by European Justice Commissioner Viviane Reding and US Attorney General Eric Holder, is to determine the full scope of the routine data snooping and discuss the legal protection possibilities for EU citizens. A final report is expected to be released in October.  (photo:  Spiegel)