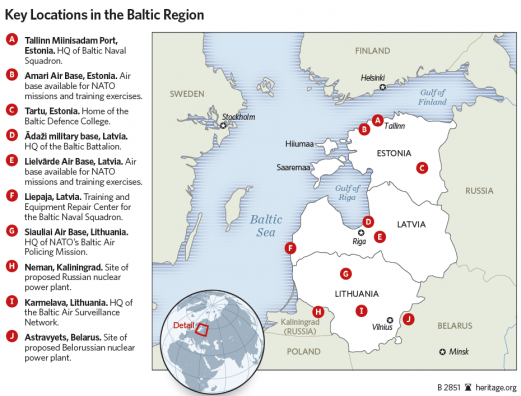 There is ample room for deeper relations between the U.S. and the Baltic states, particularly in joint military training and defense procurement. It is clear that the Baltic states are committed to transatlantic security. In light of the Obama Administration’s failed “reset” with Russia and the so-called pivot to Asia, the U.S. should find opportunities to increase defense and security cooperation with the Baltic states as a way to recalibrate its focus on Eastern Europe.

*  Show America’s gratitude and appreciation. The White House, State Department, Department of Defense, and Congress should use opportunities to express publicly America’s thanks for the Baltic states’ contributions to NATO and to congratulate them on how far they have come since the end of the Cold War.

*  Establish a permanent military presence in the Baltic region. There are strong indications that the Baltic states desire a permanent U.S. military presence in the region. This does not have to mean establishing a huge garrison of U.S. troops. In 2012, the U.S. Air Force established a small detachment at a Polish air base that hosts periodic rotations of U.S. aircraft. A similar air detachment should be considered for the Baltics. This would offer more opportunities for joint military training and demonstrate U.S. commitment to transatlantic security.

*  Consider using the Baltic states as part of its global prepositioning program. The U.S. Marine Corps’ only land-based prepositioning site for military equipment in the world is in Norway. This facility has proven useful for supporting the mission of the U.S. Marine Corps in Europe. If the requirement arises for another land-based prepositioning site, the U.S. should consider the Baltics. This location would complement the focus placed by the Baltic states on hostnation support and would demonstrate U.S. commitment to transatlantic security.

*  Consider establishing a Baltic Sea Rotation Force. The U.S. Marine Corps currently operates a Black Sea Rotational Force that consists of a special-purpose Marine air-ground task force (SPMAGTF). Although the Black Sea SPMAGTF carried out a training exercise in Lithuania in 2012, the main focus of the task force is the Black Sea and Caucasus regions. The U.S. should consider the value of establishing a similar task force for the Baltic Sea region. Such a task force would offer more opportunities for joint military training for the Baltic states as well as for Poland, Finland, and Sweden. Furthermore, such a task force would demonstrate U.S. commitment to transatlantic security.

*  Reiterate America’s commitment to NATO’s Article 5. There is a perception in parts of Europe that transatlantic security is a lower priority for the Obama Administration than it was for previous Administrations. The Obama Administration could demonstrate America’s commitment to NATO this autumn by sending a sizable contribution to Steadfast Jazz 2013. Considering the degree of importance attached to Steadfast Jazz 2013 by America’s NATO allies, the 200 troops provided by the U.S. sends the wrong message. . . .

*  Continue special forces cooperation after the withdrawal from Afghanistan. The Baltics have placed themselves on the map in terms of special operations and it would be a waste if the U.S.–Baltic special forces relationship disappeared when combat operations in Afghanistan end. The U.S. should work with the Baltic nations to find new areas of cooperation in the field of special operations. This might include allowing a liaison officer from each Baltic state in the U.S. Special Operations Command. . . .

*  Help facilitate U.S. LNG exports to the Baltic region. The security of energy supplies is a serious concern of the Baltic states. It also has an impact on military readiness which is why the U.S. and NATO should be concerned. The United States could do more to help by providing the Baltic states with access to sources other than Russia for natural gas. A bipartisan bill has been introduced in both the House of Representatives and the Senate that would lift restrictions against the export of U.S. natural gas to NATO allies. The sooner restrictions can be lifted, the stronger NATO and the Baltic states will become. . . .

The Baltic states show a degree of enthusiasm for NATO and transatlantic relations currently not found on either side of the Atlantic. The U.S. should grasp this opportunity to develop and deepen its relationship with the Baltic states. Doing so is in the interests of the U.S., NATO, and the Baltics.