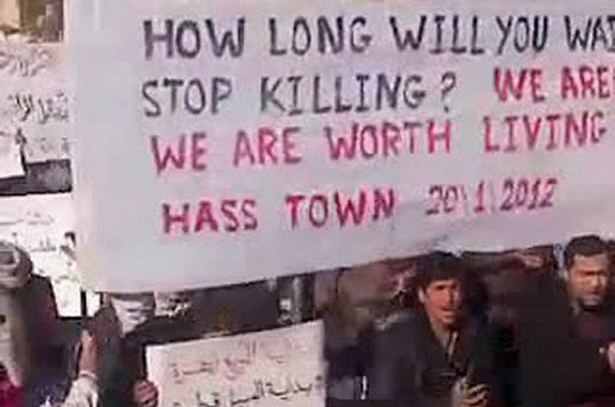 From Anne-Marie Slaughter, the Atlantic:  A full-fledged civil war in Syria could quickly become a proxy war between Turkey, Saudi Arabia, Qatar, and/or at least some NATO countries on one side against Iran, Russia, Hizbollah, and possibly Iraq and Hamas on the other. That is a deeply dangerous and destabilizing prospect. Streams of refugees will burden and potentially disrupt local politics in Jordan, Turkey, Iraq, and Lebanon. The Kurds in Iraq and Turkey and the Druze in Lebanon might join in on the side of their respective Syrian cousins. The economy of the entire region would be badly disrupted, even independent of any impact on oil prices. And Syria itself would be devastated, inviting the same power struggles and sectarian violence we see in Iraq today.

Still, intervention makes sense only if it actually has a higher chance of making things better than making them worse. In the Syrian case, a number of conditions would have to be met to satisfy this test. First, the Syrian opposition itself would have to call for some kind of armed intervention. Groups of protesters in different towns have requested international help, but the Syrian National Council would have to make a formal request. Second, the Arab League would have to endorse this request by a substantial majority vote.

Third, the actual intervention proposed would in fact have to be limited to protection of civilians through buffer zones and humanitarian cordons around specific cities, perhaps accompanied by airstrikes against Syrian army tanks moving against those cities. It could not, as in Libya, take the form of active help to the opposition in their effort to topple the government. Instead, the Arab League should work with the opposition and members of the business community and the army within Syria to craft a political transition plan that would create some kind of unity government and a timetable for elections.

Today, the Arab League proposed a plan for Assad to step down and be followed by his vice president and the formation of a national unity government followed by elections; the Syrian government dismissed it out of hand as a violation of Syrian sovereignty and "flagrant interference in internal affairs." The Arab League should next try to invite both members of the opposition and members of the Syrian business community and various minorities to work on a plan that would come from Syrian citizens as well as the League.

Fourth, the intervention would have to receive the authorization of a majority of the members of the UN Security Council — Russia, actively arming Assad, will probably never go along, no matter how necessary — as an exercise of the responsibility to protect doctrine, with clear limits to how and against whom force could be used built into the resolution. Finally, Turkish and Arab troops would have to take the lead in creating zones to protect civilians, backed by NATO logistics and intelligence support if necessary.