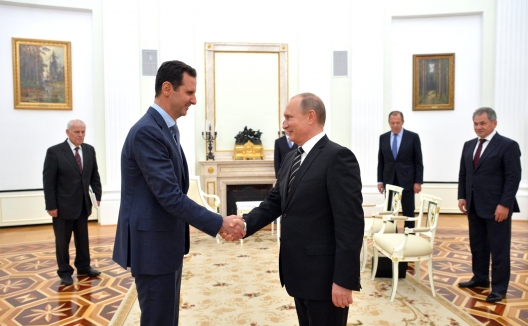 President Barack Obama on Tuesday used the downing of a Russian warplane as evidence to support the view of the international community that the Kremlin get with the program in the fight against the Islamic State.

While the move by Turkey, a NATO ally, to shoot down a Russian jet that it says was flying in Turkish airspace would seem to complicate the fight against the Islamic State and the effort to resolve the broader Syrian civil war, Obama has a clear message on how the event should be felt moving forward.

“I think this points to an ongoing problem with Russian operations,” Obama said during a joint news conference in Washington with French President François Hollande. “If Russia dedicated its energy to ISIS, some of the potential for escalation would be less likely. The sooner we agree to this political process, the less likely that you have the kind of events that took place, apparently, today….”

“There has never been a point where we said we don’t want Russia or other countries that may have differences with us to avoid working against ISIL,” Obama said. “The challenge has been Russia’s focus on propping up Assad rather than focusing on ISIL.”

One foreign policy analyst says the U.S. could be doing more militarily to head off Russia and assert its own strategy in Syria.

“The Assad regime is very vulnerable and weak, which is why Russia came to help,” said Jorge Benitez, an expert on NATO and defense policy at the Atlantic Council. “We need an anti-Assad and anti-ISIS strategy and to put forth resources to remove both of those threats from Syria….

“Hollande has already directed France in recent days to bomb ISIS targets in Syria, after the country’s efforts before then had been limited to Iraq….

“We’ve got a coalition of 65 countries who have been active in pushing back ISIL for quite some time,” Obama said. “Russia is a coalition of two—Iran and Russia supporting Assad. Given Russia’s military capabilities and the influence they have over Assad, them cooperating would be enormously helpful in bringing about a resolution of the civil war in Syria and allow us to refocus our attention on ISIL. We hope they [Russia] refocus their attention on the most substantial threat.”

But any cooperation seems far off, Benitez says.

“I am very worried about Russia’s response,” Benitez said. “Putin is the type of leader who makes miscalculations and takes greater risks than people expect him to. So I don’t think he will become what we want him to be—safer and calmer. I think these military accidents, crises, and confrontations will continue, because like we’ve seen, Putin doesn’t turn the heat down when he’s threatened. He turns it up.”