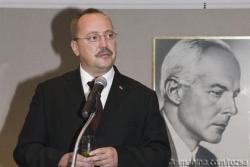 From James Morrison, the Washington Times:  Europe fears that the WikiLeaks scandal will undermine confidence in U.S diplomatic security, as the unauthorized release of hundreds of thousands of secret documents foreshadows a cyberthreat facing NATO nations, a top Hungarian official said on a visit to Washington.

"It is so detrimental that it is the Lehman Brothers of American diplomacy," Deputy Foreign Minister Zsolt Nemeth told Embassy Row, referring to the Wall Street firm that filed the largest bankruptcy in U.S history in 2008.

Mr. Nemeth called the release of the documents a "serious crime" that affects the "security of the NATO alliance."  (photo: Akos Rozsa/GImagine)