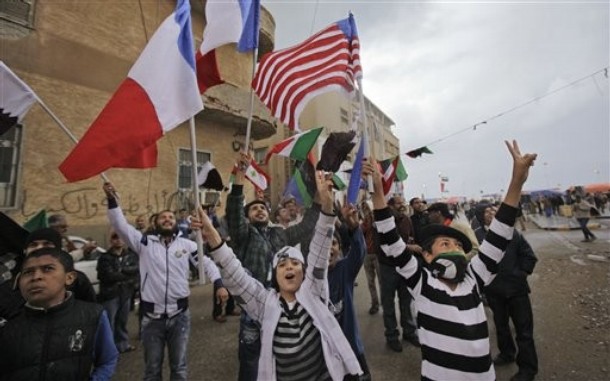 From Anders Fogh Rasmussen, NATO:  NATO is a unique organisation. Our Allies have the military assets to get food and shelter to those who urgently require it; aeroplanes and helicopters that can fly to locations that are isolated; engineers able to build bridges to places that would otherwise be impossible to reach; and we have the ability to facilitate and co-ordinate all of this in real time.

NATO’s disaster response unit, ready on a 24 hour basis, can effectively act as a clearing house. Matching the offer of aid with the physical means get aid quickly to where it is needed. Right now – they are on stand by – ready to assist efforts to bring relief to the people of Libya – should it be requested.

NATO not only has the means to do all this, it also has considerable experience – which brings me to my second point.

Over the past 12 years the Alliance has responded to over 50 requests for assistance from nations.

In the summer of 2005 we flew aid to the US to help the people of New Orleans, following hurricane Katrina.

After the terrible earthquakes in Pakistan later that year, NATO delivered 3500 tonnes of aid to devastated populations. And when disastrous floods hit Pakistan last autumn, NATO was again part of the relief operation – flying food and shelter into the country.

Last year we responded to requests for aid as a result of floods, fires and earthquakes from a range of countries including, Tajikistan, Poland, Israel and Montenegro.

And today, NATO is actively supporting the United Nations’ humanitarian efforts in Somalia, by escorting ships with food aid and protecting them against the threat of piracy. …

In order to deliver better interaction between NATO and aid agencies and humanitarian organisations, NATO is transforming the way we plan and operate.

We are putting the principles of the comprehensive approach at the heart of our operations. And we are developing a small civilian crisis management team to interface more effectively with all those other organisations who have a role to play in any crisis. …

As events in Libya have shown, we cannot predict what lies over the horizon.  In the future we may face the dangerous combination of climate change, water scarcity, population increases and a growing demand for food. We need to be ready for anything.

The past few weeks have shown the difficulties of forging international solidarity and unity of purpose.  But they have also demonstrated NATO’s unique value when it comes to dealing with a security crises, or helping to relieve human suffering.

In a world where everything is connected, and not one single nation or organisation can solve all the problems, we must co-ordinate, co-operate and communicate. NATO is keen to play its role.