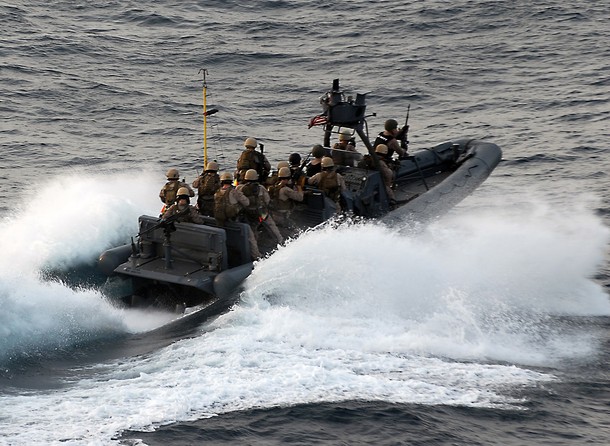 From the Economist:  According to the International Maritime Bureau, which posts live data on raids, Somali pirates hold 33 vessels and 758 hostages. In January alone the bureau recorded 35 attacks. The raiders took seven ships and 148 new hostages. The United Nations estimates the annual cost of piracy in the Indian Ocean at between $5 billion and $7 billion. Later this month, as the monsoon ends and the seas calm, attacks will multiply and the numbers of ships and hostages held will rise. …

Ransoms are paid in cash, partly because Somalia has no functioning banking system, and partly to hamper American anti-money-laundering investigators. Once the professional negotiators who work for both sides have agreed on a sum, the money is usually dropped from a light aircraft. Increasingly, however, the pirates accept money using electronic funds transfer. Colonel Richard Spencer, the British chief of the EU’s naval force, says the size of ransoms is rising inexorably.

Mr [Stephen] Askins [of Ince & Co, an international law firm] notes that the average ransom rose from around $1.5m at the beginning of 2009 to $3.5m at the end. In early 2010 Maran Centaurus, a Greek-owned tanker, was reported to have fetched between $5.5m and $7m after being held for 50 days. In November last year a South Korean oil tanker, the Samho Dream, captured in April, set a new record when it was released after a payment of $9.5m. The pirates who hijacked her at first demanded $20m, an indication both of their growing confidence and a form of score-keeping. New records this year seem certain.

The efforts of governments and industry to curb piracy have had mixed results. Three main naval task forces now operate in the area: Operation Atalanta, the EU contingent, which was originally created mainly to protect the UN’s World Food Programme shipments to Somalia, but has expanded to take on a general anti-piracy role; Operation Ocean Shield, a NATO standing maritime group with a similar remit to the EU force and with overlapping national contributions; and CTF-151, a wider international effort based on a 25-nation coalition under American command and headquartered in Bahrain. China, Japan, India, Iran, Russia and Saudi Arabia, among others, deploy their own naval forces under national command.

Since late 2009 all the ships in counter-piracy operations have had access to Mercury, a secure internet-based communication system set up by the British. This helps co-ordination. Ships from one navy or task force can request information or help from another, whatever the state of relations between their two countries. Even Iranian warships can discreetly work together with their American counterparts. …

Yet satisfaction at such successes is mixed with frustration and an overwhelming feeling that naval deterrence is doing little more than prevent piracy from getting out of control. Colonel Spencer says: “The military resource is finite and only treats the symptoms. We’re only holding the line.”

The biggest difficulty is that by squeezing the pirates hard in the Gulf of Aden the naval task forces have created a “balloon effect”, spreading attacks out to the middle of the Indian Ocean. In March last year an attack took place 975 nautical miles south of Haradheere, close to Madagascar; and in April the pirates struck 1,300 nautical miles east of Haradheere, nearer the coast of India than Somalia.

The result is that the area of pirate operation is now about the size of western Europe. Policing it, says Colonel Spencer, would require five times as many warships as the task forces can muster, each one with its own helicopter. Even then, a helicopter would typically need around an hour to get from a warship to the scene of an imminent attack. In reality, patrolling frigates get less than ten minutes’ notice of an attack.  (photo: US Marine Corps/Getty)