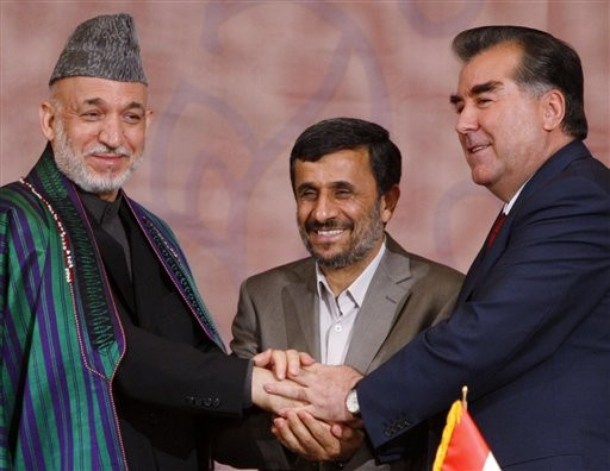 From Robin Pomeroy, Reuters:  Iran’s president told the leaders of Afghanistan and Tajikistan on Thursday that the three neighbors could provide a counterweight to NATO in Asia once foreign troops quit the region.

Mahmoud Ahmadinejad, a bete noire of the West over Iran’s nuclear activities, said the three countries had all thrown off foreign domination in recent decades and should strengthen economic and security ties and be independent of big powers. …

"Many don’t find this desirable — three independent countries forming a powerful friendship in the region, and changing the current situation. None of them is happy about this," he said in part of the meeting which was televised. …

"The fate of the three countries are knotted together in different ways and those who impose pressure on us from outside, and who are unwanted guests, should leave. Experience has shown they never work in our interest."

"Those who came in from Europe representing NATO, they want to put pressure on China, Russia and India and if they are confronted by three independent, empowered countries here, then that is an obstacle," he said.

Afghan President Hamid Karzai, who addressed the other leaders seated around a triangular table as "my dear brothers," has been trying to improve relations with Iran in recent months.

He welcomed Ahmadinejad to Kabul in March and said he would host him and Tajikistan’s President Imomali Rakhmon at the next trilateral meeting in the Afghan capital at an unspecified date.  (photo: AP)