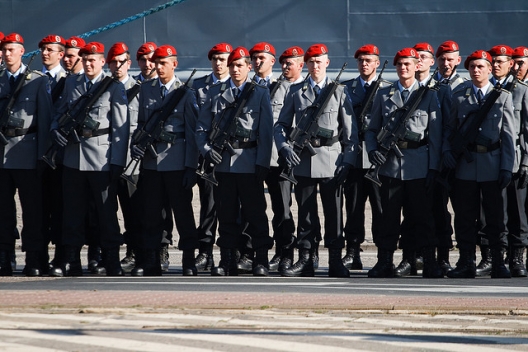 Something is sprouting in Germany. As Europeans ponder the necessity of military strength after Russia’s annexation of Crimea, and NATO charts its course for the post-Afghanistan era, Europe’s reluctant central power is doing some serious soul-searching on its role as a military player. . . .

The strongest evidence for this change comes from the reassurance debate in NATO that ensued after Russia’s military aggression in Ukraine. Not only did Germany pledge to reinforce rotating air-policing capacities in the Baltic states and send a vessel for NATO’s naval task force in the Baltic Sea. It also doubled its presence in the alliance’s Multinational Corps Northeast headquarters in Szczecin, Poland, from 60 to 120 staff officers, enabling the corps to increase its level of readiness significantly. This NATO headquarters is predominantly dedicated to territorial defense—in other words, more than anything else, it looks at Russia. . . .

Most importantly, Germany decided to integrate its land forces into the exercise scheme NATO is currently putting together to strengthen the alliance’s troop presence on its Eastern flank. This scheme, which will likely be adopted at a major NATO summit in South Wales in September, will lead to an ongoing exercise activity in Central Europe. That would put NATO troops on the ground at all times on a rotating basis, but without the permanent stationing of units in that region.

Only months ago, Berlin would have categorically ruled out such a step. Now, Germany has put itself firmly at the center of a substantial NATO compromise that is addressed, of course, at Moscow. This is not a revolution in Germany’s military posture, but it is substantial progress.

Even before the Ukraine crisis made such steps necessary, Germany had contributed to NATO’s planning for the post-Afghanistan period by proposing a “framework nations” concept. This plan is designed to form groups of allies within NATO that focus on specific capabilities clusters, with the goal of making those capabilities more readily available for military contingencies. The idea is to assign the leadership of each cluster to a framework nation in charge of leading the effort.

Germany has volunteered to lead one cluster to fill the idea with life. After some initial hesitation, particularly on behalf of the United States and France, the framework nations idea is now accepted inside NATO.

The proposal is not only a substantial conceptual contribution by Germany to the debate about NATO’s future. It is also a clever self-binding mechanism. Knowing full well the risks of the volatile domestic debate about all things military, by committing itself as a framework nation, the leadership in Berlin has one more argument at home as to why Germany can’t weasel out any longer. Germans dislike violating multinational commitments. The framework nations concept is just as much about tactics at home as it is about strategy in NATO.

Jan Techau is the director of Carnegie Europe.