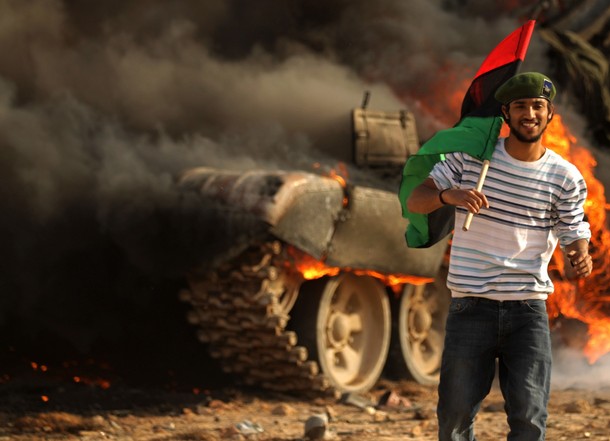 From Ross Douthat, the New York Times:  Can we really hand off this mission? Officially, this is a far more multilateral venture than was, say, the invasion of Iraq. But as Foreign Policy’s Josh Rogin points out, when it comes to direct military support, this war’s coalition is “smaller than any major multilateral operation since the end of the Cold War.” Officially, too, the United States is already stepping back into a supporting role, as NATO takes over the command. But as Wired’s Spencer Ackerman argues, the difference between a “high” United States involvement and a “low” military commitment may prove more semantic than meaningful.

[President Barack] Obama has said our involvement will be measured in “days, not weeks.” With one week down already, is this really plausible? And anyway, how responsible is it to commit American forces to a mission and then suggest, as a senior administration official did last week, that “how it turns out is not on our shoulders”?

Is Libya distracting us from more pressing American interests? While we’ve been making war on Qaddafi’s tin-pot regime, our enemies in Syria have been shooting protesters, our allies in Saudi Arabia have been crushing dissidents, Yemen’s government is teetering, there’s been an upsurge of violence in Israel, and the Muslim Brotherhood seems to be moving smoothly into an alliance with the Egyptian military. Oh, and we’re still occupying Iraq and fighting a counterinsurgency in Afghanistan and trying to contain Iran.

One can quibble with Goldberg’s ordering but not his broader point. While we intervene in Libya, what is our Egypt policy? Our Yemen policy? Our Syria policy? With the entire Middle East in turmoil, does it make sense that Washington is focused so intently on who controls the highway between Ajdabiya and Surt?

It’s clear that not everyone in this White House thinks so. Defending the intervention on “Meet the Press” on Sunday, Robert Gates let slip that he believes that Libya is not a “vital interest” of the United States.  (photo: Getty)