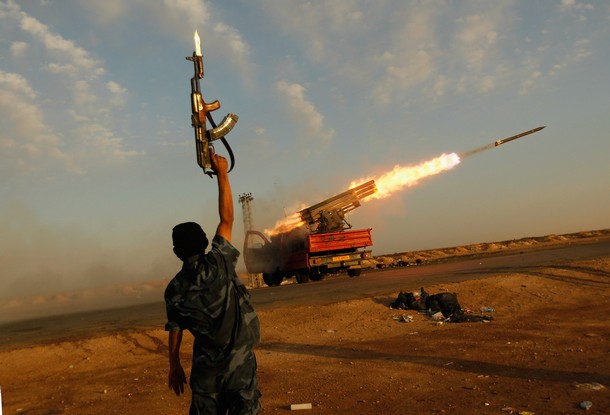 From Robert Haddick, Small Wars Journal:  It is now clear that the Western policymakers who opted for intervention in Libya underestimated the resilience and adaptability of Qaddafi’s military forces. . . .

Libya’s rebels, now openly supported by NATO, are far from accomplishing the de facto objective of the campaign, the removal of the Qaddafi family from Libya. The rebels and Western leaders had hoped that Qaddafi would quickly flee or be overthrown by a palace coup or an uprising in Tripoli. These may yet occur. But hoping for them is not a strategy.  If anything, a month of combat has toughened Qaddafi’s troops and his remaining inner circle. With Western prestige now heavily committed, what will it actually take to get rid of Qaddafi? . . .

How large a rebel army will it take to smash through all of the Qaddafi-held cities between Benghazi and Tripoli? Planners should assume significant resistance, requiring a rebel force equipped with armored vehicles, artillery, and trained infantry. Planners should assume casualties from urban combat and significant logistics and maintenance expenses. Pro-Qaddafi areas in the rear of the advance on Tripoli will need to be garrisoned, which will add to the required forces.

A cost estimate that includes a conservative margin of safety might be one-tenth of the train-and-advise effort in Afghanistan: a 15,000-soldier rebel force, 1,000 foreign trainers and advisers, at a cost of $1 billion per year.  (photo: Getty)