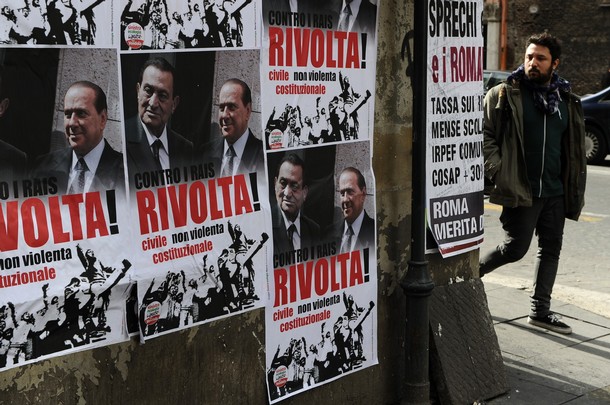 From the Editors of the New York Times:  Italian governments are rarely known for efficiency. But even the country’s most pressing problems are being ignored since a court ruled last week that Prime Minister Silvio Berlusconi must stand trial on charges of prostitution with an under-age girl and abusing his office to cover it up.

This is a particularly perilous time for Italy to be out of action. New governance rules for the euro will likely be decided over the next few months, with decisive consequences for Italy’s unhealthy public finances and anemic growth rate. Revolutionary turmoil is convulsing nearby North Africa, where Italy has counted on Libya’s Muammar el-Qaddafi to supply its oil needs and the deposed Tunisian President Zine el-Abidine Ben Ali to hold back would-be economic migrants. …

The Italian Parliament can vote to replace this government with a temporary all-party coalition whose main task would be to prepare for new elections.  (photo: Getty)