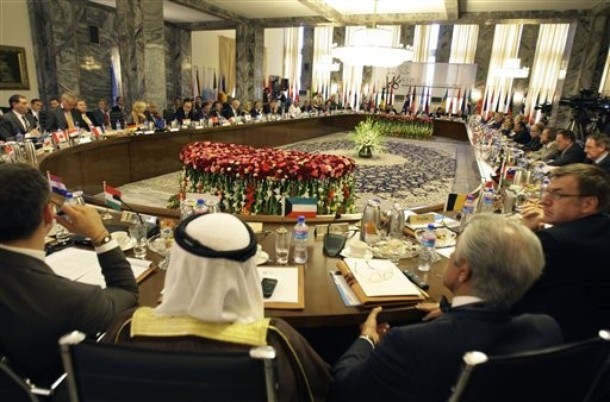 From the New York Times:  The draft communiqué, which will be signed later Tuesday and was obtained by The New York Times, sets 2014 as the date when Afghanistan’s security forces will be in the lead in military operations throughout the country. The document sets the end of 2010 as the date for a more detailed outline of the transition schedule for security. …

17. Participants welcomed the Government of Afghanistan’s commitment to a phased exercise of full authority over its own security. The international community expressed its support for the president of Afghanistan’s objective that the Afghan National Security Forces (ANSF) should lead and conduct military operations in all provinces by the end of 2014. The international community committed to provide the support necessary to increase security, and to the continued support in training, equipping and providing financing to the ANSF to take on the task of securing their country. Participants agreed to continue efforts to ensure stable areas benefit from development.

18. Within the framework of Afghan sovereignty participants endorsed the Afghan government’s plan, developed in coordination with the North Atlantic Treaty Organisation NATO, based on mutually-agreed criteria and phased transition to full Afghan responsibility for security, as set out in the technical Inteqal (transition) paper, and endorsed a decision-making process of the government of Afghanistan and the North Atlantic Council (NAC). The international community committed to support the government of Afghanistan in creating the conditions necessary to allow for transition and to continue to support the transition process to advance to the point where the Afghan National Army (ANA) and the Afghan National Police (ANP) are fully capable of maintaining internal and external security, public order, law enforcement, the security of Afghanistan’s borders and the preservation of the constitutional rights of Afghan citizens. The government of Afghanistan and NATO / ISAF are to assess jointly the provinces with the aim of announcing by the end of 2010 that the process of transition is under way.

19. In order to ensure stability and provide conditions for the effective rule of law, the Afghan government pledged to:

Progressively enhance the quality and quantity of the ANSF such that the ANA reaches a strength of 171,600 personnel and the ANP of 134,000 by October 2011, with the necessary financial and technical support by the international community;

Support the ANSF, in line with the government’s financial means, with continued and sustained financial and technical support from the international community.  (photo: AP)