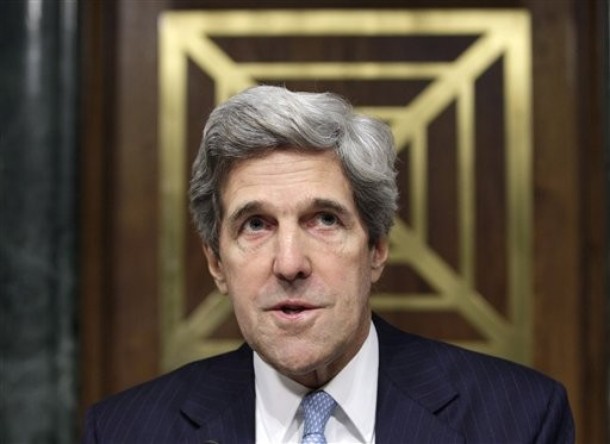 From John F. Kerry, the Washington Post: [O]ur diplomatic efforts must extend beyond the United Nations. The support of NATO and the African Union are important. To avoid the perception of NATO or the United States attacking another Muslim country, we need the backing of the Arab world.

On that front, there are promising signs. The six Arab countries of the Gulf Cooperation Council have called for a U.N.-imposed no-fly zone. The Arab League may consider a similar proposal on Saturday. Muslim nations in particular should support preparations for intervention if the violence spirals out of control.

Gaddafi cannot be allowed to think that he can massacre his people with impunity. And he cannot be free to make those attacks more lethal by using his airpower. If the United Nations cannot approve a resolution for implementing a no-fly zone, then the United States and its allies in NATO and the Arab world must be prepared to prevent a massacre like the one that occurred in Srebrenica in 1995, when more than 8,000 men and boys were slaughtered.

Even imposing a no-fly zone would not be a panacea. It probably would not tip the balance if Libya deteriorates into a full-scale civil war. But it would eliminate airstrikes and save the lives of civilians. It is a tool that we should be ready to use if the situation warrants and would signal to the opposition that it is not alone. …

The one option that should not be on the table is American ground troops; no one wants to see U.S. forces bogged down in another war, especially in another Muslim country. And, as President Obama has said, we must not deprive the Libyan people of full ownership of their struggle for freedom or give Gaddafi a useful foil and scapegoat.

Perhaps the mere threat of a no-fly zone will keep Gaddafi’s pilots from using their helicopters and fighter jets to kill their own people. If it does not, we should be crystal-clear that we will lead the free world to avoid the senseless slaughter of any more Libyan citizens by a mad man bent on maintaining power. We should also make clear that the United States – just as we did in Bosnia and Kosovo – is taking a stand against a thug who is killing Muslims.

The writer, a Democrat from Massachusetts, is chairman of the Senate Foreign Relations Committee.  (photo: AP)