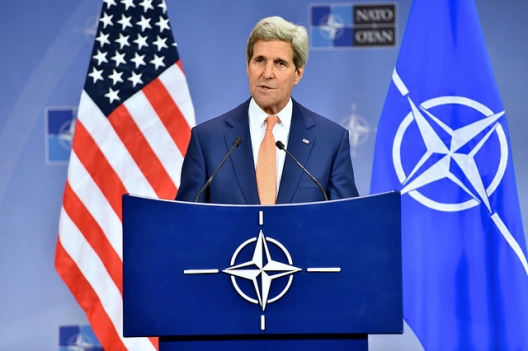 [T[oday, we had a chance to take stock of the strong measures that have been taken in order to provide reassurance to our eastern allies on the land, on sea, and air, and we’ve taken measures that demonstrate that our Article 5 commitment is absolutely rock solid. We also affirmed NATO’s open door policy as well as the vital importance of having strong, capable partners. . . .

As Secretary General Rasmussen has said, Russia’s recent moves in Ukraine served as a wakeup call. As our economies begin to grow again, a strong NATO requires defense spending by all, and President Obama is committed that the United States will do its part, and he has asked Congress for an additional $1 billion for defense spending in Europe.

As we head to the Wales summit, every ally spending less than 2 percent of their GDP needs to dig deeper and make a concrete commitment to do more. And all you have to do is look at a map in order to understand why – Ukraine, Iraq, Syria – all threats to peace and to security, and they surround the region. . . .

Just a few months ago right here in Brussels, a man who had recently returned from fighting in Syria shot three people at a local museum. NATO allies in the entire international community must remain focused on combatting the growth of extremism. With the Wales summit in September, our alliance has the chance to become far more adaptable in how we meet emerging threats and far more capable in how we build the capacity of our countries to be able to not only respond to them but, more importantly, to preempt them.

Excerpts from remarks to the press by Secretary of State John Kerry, Brussels, June 25, 2014.