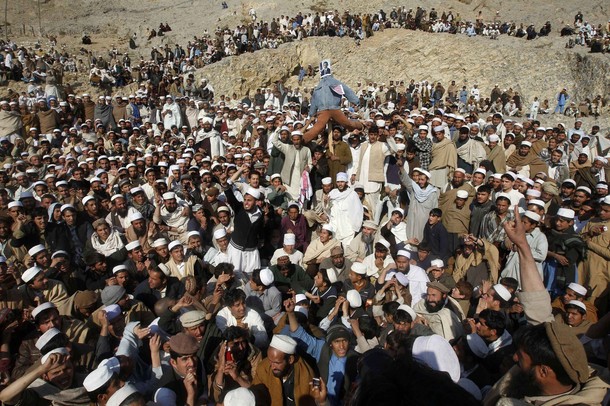 From Sarwar Kashmeri, the Huffington Post:  Muslims believe the Koran is the very word of God. It is kept on top of book shelves and read by placing it on a wooden platform to prevent dirt from soiling it. One washes ones hands before touching a Koran, covers ones head when reading it. You couldn’t spend a week in a Muslim country without understanding the Koran’s significance. Now imagine the feeling of the Afghans who saw Americans throwing bag-loads of the holy book in a garbage dump and burning them!

The damage that has been done to the credibility of allied forces in Afghanistan and beyond is incalculable. . . .

The question in Afghanistan now is how far will the protesters go? And will significant numbers of the Afghan National Army and Police join in. If this were to happen the choices facing the United States would be bleak. One option — rush in reinforcements to stabilize the situation, which would mean a bloody conflict waged against the very people America is there to help. The other option — to accelerate the exit from Afghanistan, which given the number of troops on the ground and the recently adopted schedule to end combat by 2014 would look like and feel like a rout of American and NATO forces.

There is, of course, a chance that the situation may revert to its previous tinder-box calm. Awaiting the next spark. Which will surely come.

The British pounded the mutineers into submission in 1857 and held on to their Indian Empire for another 90 years. I suspect the United States will be lucky to remain in Afghanistan for another year.

Sarwar Kashmeri is a Senior Fellow at the Atlantic Council and the author of "NATO 2.0: Reboot or Delete?"   (photo: Reuters)