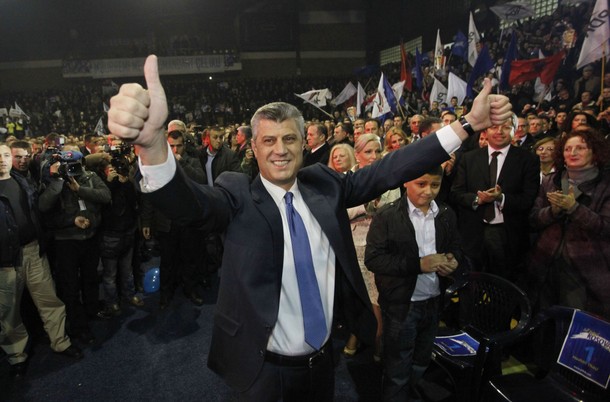 From the Telegraph:  Hashim Thaci, the incumbent prime minister, has claimed victory in Kosovo’s first general election since the province declared independence from Serbia, as an independent exit poll showed his Democratic Party of Kosovo 6 percentage points ahead of its rival.

"This is a vote for a European Kosovo," Mr Thaci said. "It is a referendum for good governance."

According to the exit poll, conducted by Kosovo-based Gani Bobi Center, Mr Thaci won 31 per cent of the vote, with former coalition partners Democratic League of Kosovo trailing at 25 per cent. If the results are confirmed it means Mr Thaci will have the upper hand in forming a government. Official results are expected on Monday.

A newcomer to Kosovo’s politics, former student leader Albin Kurti, won 17 per cent of the vote, according to the poll, and former rebel leader Ramush Haradinaj‘s Alliance for the Future of Kosovo won 12 per cent.  (photo: Reuters)