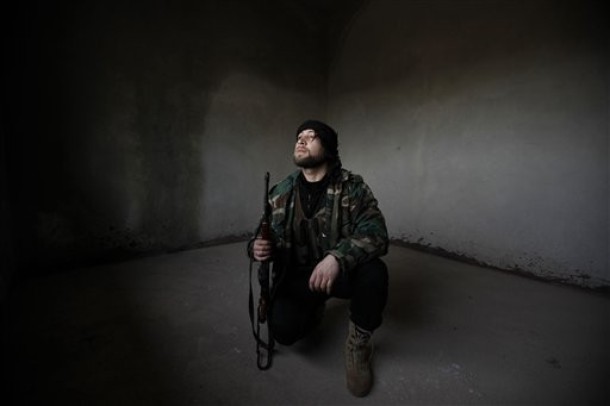 From Radwan Ziadeh, the Financial Times:  A well-rounded intervention strategy would involve the following. First, as in Kosovo, the international community – be it a joint UN-Arab League mission or a coalition of “Friends of Syria” – must designate safe zones to be protected by air power. An air campaign would minimise the risk for intervening actors. The international community, though, must help enforce these havens, or risk their bombardment from a brazen and emboldened Mr Assad. Air-based defence from such a coalition could also be used to protect humanitarian corridors.

Critics of intervention worry that such a campaign could fuel terrorism and sectarian tensions across the region. The Syrian opposition, however, has had almost a year to plan for a post-Assad Syria, and the Syrian National Council has organised itself in such a way as to answer these fears of sectarian strife. First, the SNC leadership includes members of every ethnic and religious group in Syria. It has also mapped out a plan for transitional justice, forecasting that the Alawite minority will probably face retribution. Secularists and Islamists are united in the name of forging a peaceful, democratic future for Syria.

Fears of sectarian tensions spreading across the region as a result of intervention in Syria are misplaced. It is the international community’s inaction that threatens to push Syria towards full-scale civil war, which would inflame divisions in Iraq, Lebanon and Jordan, among others. If Syria falls into civil war, so will the surrounding region. The US may be tired of war but it can still join the right side of history by supporting an international coalition to help save the Syrian people. Thus far, Syrian civilians have been victims of international politics. Now, only an international intervention will stop the atrocities.

The writer is a senior fellow at the US Institute of Peace and a member of the opposition Syrian National Council.  (photo: AP)