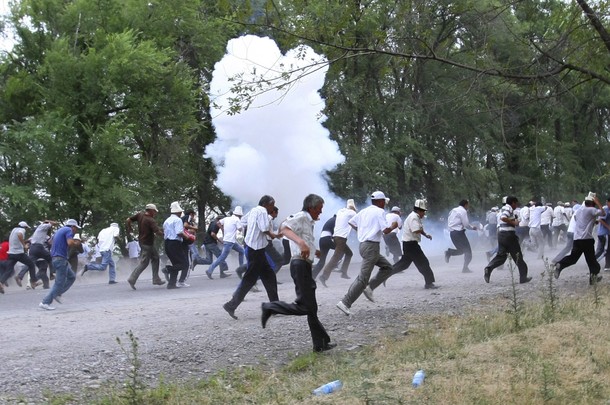 From RIA Novosti:  Kyrgyz Opposition leader and businessman Urmat Baryktabasov, who organized Thursday’s mass protest in the capital Bishkek, has been detained, the head of the Kyrgyz government’s press service said on Thursday.

"Urmat Baryktabasov has been detained by the police," Farid Niyazov said, adding that his six closest accomplices had also been arrested.

Thousands of supporters of Baryktabasov gathered on Thursday on the square in front of the country’s parliament in Bishkek, which currently houses the interim government. Baryktabasov was refused entry to the square by police. …

A Kyrgyz police spokesman said that police used tear gas and stun grenades against the protestors.

From Ria Novosti:  Members of the Kyrgyz opposition gang who organized Thursday’s mass protest in the capital Bishkek planned to assassinate all the high-ranking officials in the Kyrgyz interim government, President Roza Otunbayeva said.

"They decided to put a hit on all the members of the Kyrgyz interim government. They made assassination attempts," Otunbayeva said.  (photo: Reuters)