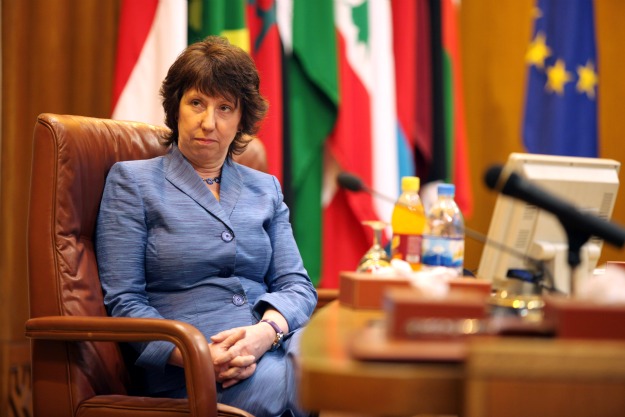 From Stephen Castle, Foreign Policy:  The crisis in Libya is a rare instance in which Europeans can plausibly claim to be outdoing Americans in foreign policy, and a rarer one still of the old world being more prepared than the new to use its military muscle. But while France and Britain have burnished their leadership credentials, the same cannot be said of the European Union. Catherine Ashton, the EU’s foreign-policy chief, has missed her best chance to date to seize the international spotlight. And Ashton’s low profile is particularly striking in light of the fact that she is the first occupant of an office designed to ensure that the European Union would assert itself effectively in times like these. …

All this comes less than 18 months after the European Union ushered in the Lisbon Treaty, designed to build a foreign policy worthy of the world’s largest trading bloc. Where Ashton’s predecessors were forced to rely mostly on the lure of EU membership to gain influence in the region, the latest treaty created a new EU diplomatic service and gave her control over significant financial resources. The European Union still has no military capabilities of its own, but many Europeans hoped that the EU’s financial firepower and international prestige would finally be organized to consistently pursue the aggregate interests of all 27 member states. …

But the initial negative press headlines following her appointment have already left their mark: The repeated questions about her suitability have fostered have a bunker mentality in Ashton’s inner circle.

Ashton admits that she has faced a steep learning curve. "It is work in progress," she told me in early March, speaking in her current, temporary office on the 12th floor of the European Commission, the bloc’s executive. "We are dealing with all these situations for the first time." She said, though, that she had learned from her experience last year following the natural disaster in Haiti, when she was criticized for reacting slowly. What she concluded was that "we could do things better. …"

Among Ashton’s greatest institutional weaknesses is that her main interlocutors are Europe’s collected foreign ministers, whose power and credibility have steadily eroded for a variety of reasons. Germany’s Guido Westerwelle, for example, has been undermined by his domestic unpopularity. Britain’s Hague has yet to make much impact on the foreign policy stage, largely because his government had previously been focusing on domestic economic issues. France’s Bernard Kouchner was, for months, a lame duck; his successor, Michèle Alliot-Marie, was recently sacked amid the fallout from the uprisings in North Africa. Her heavyweight replacement, Alain Juppé — judging from the way he was taken by surprise by his president’s decision to recognize the Libyan opposition — appears not to be as keyed in on major decisions as he would have thought.

Indeed, foreign policy in Europe is increasingly determined by its prime ministers and presidents. And they, in power, protocol, and seniority, far outgun Ashton. On big, divisive issues such as whether to press for a no-fly zone over Libya, she has little option but to keep her head down and follow their lead. Javier Solana, who held a less powerful version of Ashton’s job before she took office, found it impossible to say anything on the subject of the invasion of Iraq when Europe’s big member states were divided. The Lisbon Treaty was intended to help bridge that gravitas gap, but it has clearly not done enough on that score.

Recognizing this, Ashton has made a concerted decision to lower expectations. She has quietly dialed down some of the more towering ambitions that Brussels bureaucrats and European insiders had of her. She has said she will concentrate on the few areas where she can realistically hope to exert influence — most notably, international development. She is also dedicated to developing long-term strategies to bolster Europe’s soft power. This month, together with European Commission President José Manuel Barroso, she presented a well-received joint paper on how to reset relations with the Arab world. This program, endorsed by EU leaders at a summit also this month, suggested that all grants and loans should be conditional on democratic reform, which would amount to a significant change in EU policy.

But these are not the sort of speedy, authoritative, ambitious results some had been hoping from Europe’s first empowered foreign-policy chief. Ashton’s efforts seem destined to be overshadowed by public disagreements among the big member states, which once again will leave Brussels groping for a raison d’être. Events in the Arab world may be moving with dizzying speed, but the job of building a European Union foreign policy will continue to travel at its own, glacial pace.