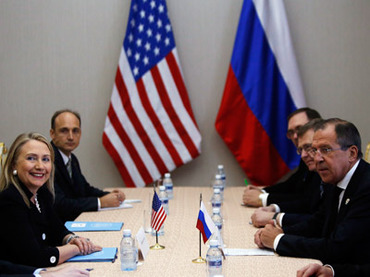 From RT:   Russian and American diplomats proposed a number of ways for getting the reset back on track in the first major Russia-US meeting since Barack Obama’s triumphant return to the White House.

Foreign Minister Sergey Lavrov and US Secretary of State Hillary Clinton attempted to break the ice in the Russia-US relationship during talks on the sidelines of the ASEAN Summit in Cambodia.

By far the most contentious issue in the bilateral relationship involves US plans for building a missile defense system in Eastern Europe. Moscow, which has been denied participation in the project, views the system as a direct threat to Russia’s national security. Now that the Democrats have emerged victorious against the Republicans, however, Moscow will be waiting for concrete proof that Obama will be “more flexible” on the issue.

Hillary Clinton, the outgoing Secretary of State, gave Russia some reason for optimism.

Clinton confirmed the US President’s commitment to finding “a compromise agreement on missile defense,” Lavrov told journalists following his meeting with Clinton in Cambodia on Tuesday.  (photo: Samrang Pring/Reuters)