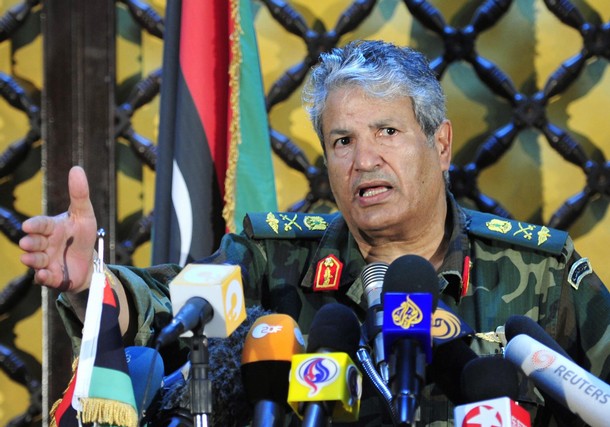 From Angus MacSwan, Reuters:  The head of Libya’s rebel army has condemned NATO for its slow chain of command in ordering air strikes to protect civilians, saying the alliance was "letting the people of Misrata die every day. "

The besieged city of Misrata, the only big population center in western Libya where a revolt against [Libyan leader Muammar] Gaddafi has not been crushed and which faces army tanks and snipers, is now the priority for NATO air strikes, alliance officials said earlier.

"NATO blesses us every now and then with a bombardment here and there, and is letting the people of Misrata die every day," Abdel Fattah Younes, head of the rebel forces said in the eastern stronghold city of Benghazi. "NATO has disappointed us."

In reaction, NATO said it was carrying out its mandate. …

NATO had been moving very slowly, allowing Gaddafi forces to advance, Younes said, adding rebels were considering referring the issues with NATO to the U.N. Security Council which authorised its mission. "NATO has become our problem," he said. …

NATO-led air power is holding the balance in Libya, preventing Gaddafi forces from overrunning the rebels but unable for now to hand them outright victory.

"Either NATO does its work properly or I will ask the (rebel) national council to raise the matter with the Security Council," Younes, a former interior minister in Gaddafi’s administration who defected, told reporters.

"Misrata is being subjected to a full extermination."

Asked about Younes’s remarks, NATO spokesman Oana Lungescu said: "The facts speak for themselves. The pace of operations since NATO took over has not abated. We have conducted 851 sorties in the past six days … we are fulfilling our mandate."  (photo: Reuters)