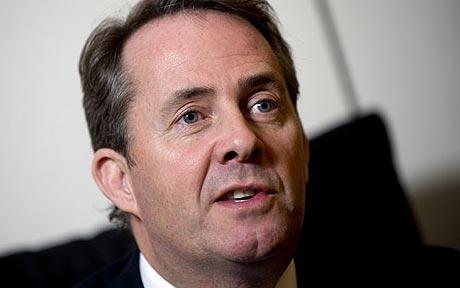 From Ben Farmer, the Telegraph:  Dr Fox said that within four years the Afghan army and police should take responsibility for security, leaving British troops to work only as military trainers.

The date is a full year earlier than the deadline suggested by David Cameron this month, who said he wanted most troops back by 2015.

Dr Fox said that Mr Cameron’s timetable was somewhat "conservative," and that the Government hoped the withdrawal of combat troops would take place a year earlier.

He spoke as foreign ministers from more than 60 countries converged on Kabul for a conference announcing the clearest timetable yet for withdrawing troops from the nearly nine-year-long conflict.

A communiqué to be agreed at Tuesday’s conference is expected to see ministers formally back Hamid Karzai’s objective "that the Afghan forces should lead and conduct military operations in all provinces by the end of 2014."

Speaking on the BBC’s Andrew Marr Show, Dr Fox said: "It has always been our aim to be successful in the mission and the mission has always said that the Afghan national security forces would be able to deal with their own security by 2014."

"We recognise that there will be further work to do in terms of training and improving the quality of those forces beyond that, which is why we have said training forces may be available after that date.

"But we have made it very clear that that will not be combat forces."  (photo: Christopher Pledger/Telegraph)