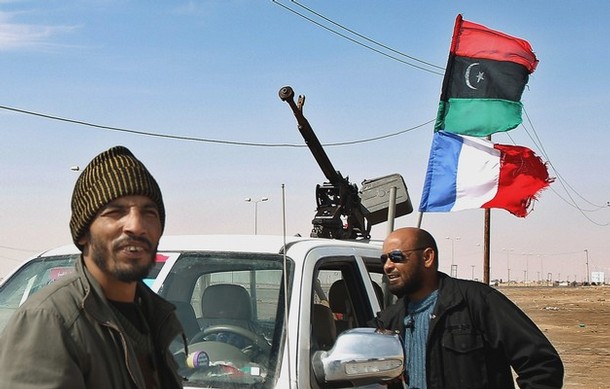 From the Editors of the Guardian:  The 20 British and French military advisers being sent to help the rebels in Benghazi do not constitute an occupation force. They are advisers rather than trainers, but they are boots on the ground. With every step being taken by those boots, Nato’s military involvement in the civil war in Libya is deepening. Just as significant was the extension of Nato’s target list to include Gaddafi’s telephone exchanges and small satellite communications systems, which have ominously been labelled dual-use. The announcements in London and Brussels yesterday were the third shift since the UN resolution authorised a no-fly zone over Libya. The others were the decision to send body armour to the rebels, and Barack Obama putting his name to a letter which said there was no future for Libya with Gaddafi in power. The war aims, which Mr Obama had earlier vowed would not be broadened to include regime change, had just got broader.

Each step has fuelled fears of mission creep, although, as one observer said yesterday, preventing the mission from collapsing altogether may be closer to the mark. Each of these steps is cumulative, and the direction of travel should concern us all. A month ago it appeared to some that Gaddafi’s forces would fold like a pack of cards shortly after the first Tomahawks flew over. However, in many instances the opposite has happened. They have adapted to the urban battlefield, hidden their heavy weapons underground, put snipers on the rooftops of Misrata and shelled rebel-held areas with cluster bombs. Their missile launchers are no longer sitting ducks. Nato officials said yesterday that strikes on a communications centre of Gaddafi’s crack 32nd brigade had reduced the regime’s ability to direct its forces on Brega and Ajdabiya. But at the same time they had to admit that strikes such as these had little effect on the street-to-street fighting in Misrata, which the Canadian commander of the air campaign, Lieutenant-General Charles Bouchard, likened to a knife fight in a phone booth – it was difficult to get into the middle of it. In other words, an intervention conducted in the name of protecting civilian life in Benghazi may have had the opposite effect in Misrata, Ras Lanuf, Brega and Ajdabiya.  (photo: Getty)