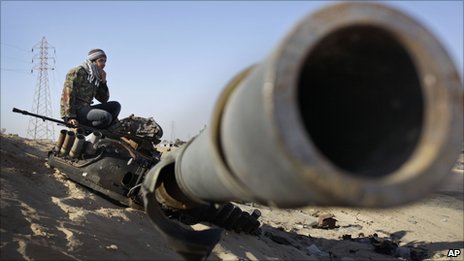 From Jonathan Marcus, the BBC:  [L]ong-time Nato analyst Prof Sean Kay is worried about just such a post-Gaddafi scenario.

"Gaddafi’s departure might actually solve little if the nation breaks down into a Somalia-type civil war," he told me.

"The best we can hope for at this stage is a de facto partition of Libya – certainly not something the Nato allies had aspired to when this adventure began.

"No matter what the outcome," he says, "it is very hard to imagine scenarios where Nato ground forces in some kind of peacekeeping role will not be needed in Libya, and likely for a very long and expensive duration. . . ."

Tony Cordesman has already established some of the lessons that he thinks should be drawn from this crisis.

"Don’t begin a military option without a realistic strike plan and the willingness to use decisive force," he says.

The focus, he believes, should be on "the total humanitarian cost of military action, and not simply on limiting the damage done by individual strikes. Consider the cost of days, weeks, and months of additional fighting to the entire population as well."  (photo: AP)