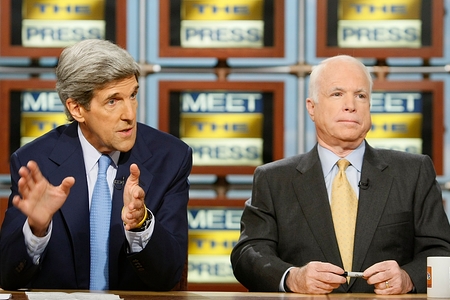 From Siobhan Hughes, the Wall Street Journal:  U.S. lawmakers staked out starkly different positions Tuesday on the legitimacy of the American intervention in Libya, suggesting more legislative challenges are ahead in a debate the White House had hoped to put to rest.

Sens. John Kerry (D., Mass.) and John McCain (R., Ariz.) introduced a resolution to give President Barack Obama authority to continue the U.S. participation in the military action for one year. But in the House, Rep. Joe Heck (R., Nev.) introduced a bill to force the U.S. to withdraw from Libya and to ban federal funds from being used in the campaign.

Rep. Dennis Kucinich (D., Ohio) is also trying to force a vote on cutting off funding by attaching a measure to a defense spending bill currently on the floor. . . .

Leaders will know more after the Republican caucus meets Wednesday morning. Late Tuesday, House Speaker John Boehner (R, Ohio), who earlier this month held off an effort to force a withdrawal from Libya, posted online two resolutions that he aimed to discuss with his caucus. One would authorize the intervention in Libya, and the other would limit funding to aerial refueling and other "non-hostile" U.S. activities in Libya.