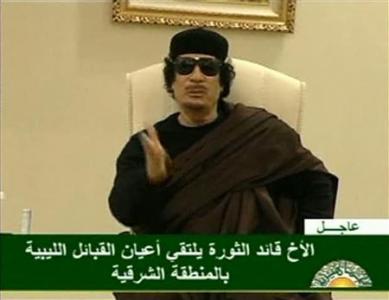 From Joseph Logan, Reuters:  Libyan state television carried brief audio remarks it said were by leader Muammar Gaddafi on Friday in which he taunted NATO as a cowardly crusader and said he was in a place they could not reach.

"I tell the cowardly crusader (NATO) that I live in a place they cannot reach and where you cannot kill me," said the voice, which sounded like Gaddafi’s.

"Even if you kill the body you will not be able to kill the soul that lives in the hearts of millions," Gaddafi said, adding he received a "massive" number of calls following a NATO air strike on his Bab al-Aziziyah compound in Tripoli on Thursday.

There was no accompanying video. But Libyan government spokesman Mussa Ibrahim said Gaddafi was unharmed and in Tripoli, leading the country and in good spirits.  (photo: Reuters/Libyan TV)