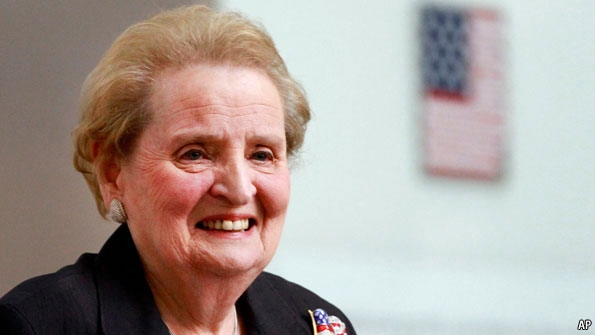 From Eastern Approaches, the Economist:  For the Czechs, Madeleine Albright (née Marie Jana Körbelová) is one of them. Some, like Alexander Vondra, a dissident turned hawkish defense minister, still calls the formidable former secretary of state “Madlenka”, her Czech pet name, with a tender possessiveness that she seems to embrace. . . .

Ms Albright’s latest book, “Prague Winter: A Personal Story of Remembrance and War”, makes it clear that the country of her birth remains close to her heart. Her likeable patriotism, fuelled by just the right dose of idealism that émigrés tend to harbour almost by default, is the connecting thread in the painful Czechoslovak history of 1937-1948 that she skillfully interweaves with a family memoir. . . .

Munich does, to a great extent, explain the peculiarities of the Czech avatar of Atlanticism, a sentiment shared by Central and East Europeans. Czech Atlanticism is Wilsonian, rather than Reaganite. Thanks to Munich, the Czechs continue to suffer from severe abandonment issues, which, as far as the Americans are concerned, they deal with through amnesia. “A lot of it is mythology. They persuaded themselves that the U.S. just wasn’t part of Munich,” says Ms Albright.

As the Czech elite so clings onto their belief in a strong transatlantic partnership and the values shared with the Americans, they tend to bother less than, say, the Poles, to hide their disenchantment with America when they feel let down. (Poles admittedly have more geopolitical reasons to foster the best possible relationship with America than Czechs do.) The “open letter” in 2009 of Central European intellectuals and politicians to Barack Obama, which bemoaned the decline in transatlantic ties, was masterminded by Mr Vondra.

Ms Albright was not impressed. “We all worked to have Europe whole and free. The first president Bush said it, president Clinton said it, and I said it, over and over again. It was a theme. Then, all of a sudden, we get this whiny letter while people are dying in Iraq and Afghanistan that we aren’t paying enough attention to Central Europe when we had clearly done that for a very long time,” she says. “It was not responsible. . . .”

Ahead of the Czech Republic’s upcoming presidential election, she fears small mindedness, corruption and isolationism, be it from the EU or globalisation. “This is an abnormal summer. After the Velvet Revolution, the Czechs thought it would all be much easier. And they so wanted to be a part of the west. Now they are more confused than I would have thought.”  (photo: AP)