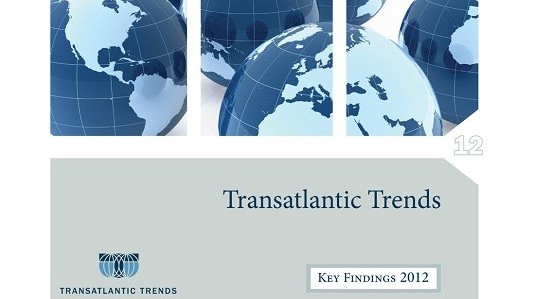 In the context of mounting global challenges, the survey uncovered some remarkable findings. Among others, four stand out: EU respondents’ steadfast support for the European Union (less so for the euro) in the midst of crisis, despite broad divergences of opinion across the EU; a broad disenchantment with domestic economic institutions and norms; Americans’ renewed focus on Europe, despite the announced defense “pivot” to Asia; and the fact that the views of Russian respondents, included in Transatlantic Trends for the first time, differ from the perspectives of Americans and Europeans in some important ways.

Transatlantic relations: Majorities on both sides of the Atlantic continued to hold favorable views of each other and to feel that strong U.S. and EU leadership in world affairs was desirable. Two-in-three Americans and Europeans agreed that both sides shared enough values and interests to enable cooperation on international problems. They also mirrored each other in the belief that the other side was more important for their national interest than the countries of Asia — unlike last year, when the U.S. respondents had shown a preference for Asia for the first time.

Half of Americans and Europeans shared an unfavorable view of China, but they remained slightly divided about the opportunities and threats it presented. They shared a high and rising concern about Iran’s efforts to acquire nuclear weapons, but disagreed markedly in their favorability toward Israel. . . .

Security policy: While a transatlantic opinion gap continues to exist on some security topics, the survey also revealed a convergence of EU-U.S. opinion on the best way forward. Large majorities in the United States and the EU wanted to reduce troop levels or withdraw all troops from Afghanistan. Despite an ongoing transatlantic debate about burden-sharing in the alliance, a solid majority in the EU reported that they continued to see NATO as essential for their security. U.S. support for NATO dropped somewhat, but was still expressed by a majority. Only minorities in the EU supported increases in defense spending because of the U.S. “pivot” to Asia. Pluralities in the EU and the United States said they would prefer to see their governments maintain current defense spending levels.

Intervention, responsibility to protect, and Syria: While Americans and Europeans continued to disagree about whether intervention in Iraq and Afghanistan had been right, a plurality of Europeans and Americans agreed that intervention in Libya had been the right thing to do. Two-in-three respondents on both sides of the Atlantic agreed on the principle of the “responsibility to protect” (under which governments are responsible for protecting civilians in other countries from violence, including violence committed by their own government). However, transatlantic majorities felt that their countries should stay out of the Syria conflict.

Russia: Majorities on both sides of the Atlantic turned from favorable to unfavorable in their view of Russia. Yet half the Russians polled held a favorable view of the United States, while two-in-three thought favorably of the EU. At the same time, majorities or pluralities among the Russians felt that Asia was more important to their national interests than the United States or Europe, felt that U.S. and EU leadership on international problems was mostly undesirable, and took an unfavorable view of NATO. Still, pluralities or majorities thought that Russia, the United States, and Europe had enough common values and interests to be able to cooperate. On specific issues — such as China, Iran, intervention in Libya or Syria — however, Russian views were quite different from those polled in the United States and Europe. In particular, Russians said they would approve of a Russian UN Security Council veto on intervention in Syria. Russian views of their own institutions were very mixed. Two-in-three Russians (69%) expressed confidence in their president — more than in any other Russian institution.

* Three-in-four Europeans (74%) continued to hold favorable views of the United States, but views across Europe varied widely. The United States’ ratings in France saw a 23-point rise to 81%. On the lower end of the scale, only 34% of Turks viewed the United States with favor (but that number is slowly on the rise, from only 22% in 2009).

* Pluralities of Americans (34%) and Europeans (39%) felt that they should take a more independent approach within the transatlantic partnership in security and diplomatic affairs.

* When asked about defense spending, majorities or pluralities in 11 of the 15 countries surveyed wanted to maintain current spending levels.

* Two-in-three Americans (62%) and Europeans (67%) agreed that members of the international community (including their own country) are responsible for protecting civilians in other countries from violence, including violence committed by their own government (the principle of “responsibility to protect”).

* However, as far as the specific case of Syria was concerned, majorities in the EU (59%), the United States (55%), and Turkey (57%) said their countries should stay out of the Syria conflict completely.  (graphic: GMFUS)