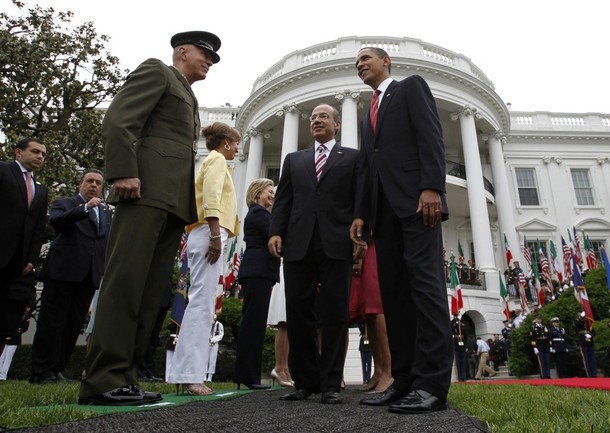 From Phil Stewart and Sue Pleming, Reuters: President Barack Obama‘s July 2011 date to start withdrawing troops from Afghanistan has given a morale boost to Taliban insurgents, who believe they can wait out NATO forces, the top U.S. Marine said on Tuesday.

But General James Conway, who is retiring this fall as commandant of the Marine Corps, said he believed Marines would not be in a position to withdraw from the fight in southern Afghanistan for years.

"In some ways, we think right now it is probably giving our enemy sustenance," Conway said of the July 2011 deadline.

"In fact we’ve intercepted communications that say, ‘Hey, you know, we only need to hold out for so long.’"

Supporters of Obama’s July 2011 date to start withdrawing forces from Afghanistan, conditions permitting, say it conveys a needed sense of urgency to Kabul. Afghans must quickly ramp up the size of their security forces for an eventual handover.

But critics say the strategy backfired, sending a signal to the Taliban that the United States was preparing to wind down the war while setting unrealistic expectations to Americans about the pace of progress in Afghanistan.

Conway, quoting one of his own commanders, told reporters: "We can either lose fast or win slow."

The timetable for withdrawal is certain to come under close scrutiny in a White House strategy review in December, which Obama called for last December when he announced the July deadline and a surge of 30,000 additional forces.

"We know the president was talking to several audiences at the same time when he made his comments on July 2011," Conway told reporters at the Pentagon.

"Though I certainly believe that some American units somewhere in Afghanistan will turn over responsibilities to Afghanistan security forces in 2011, I do not think they will be Marines." (Photo: Reuters)